Pharmac’s a treasure – watch out for pirates

Geoff Simmons will speak on the importanceof Pharmac at a Fabian seminar today at St John’s Church at 5:30pm. Pharmac is also “on the table” in negotiations with the US in the Trans-Pacific Trade agreement. It is no secret that the US pharmaceutical industry would like to clip Pharmac’s wings; but our government’s approach is secret as they have refused to release draft negotiating texts. Geoff and Gareth Morgan have written to government arguing that  a US free-trade deal isn’t worth it if Pharmac is sacrificed.
All are welcome to the free seminar.

All the World’s A Square

Some inspiration as Monday morning looms.

Why is it that the Ministry of Education has at least 20% of the school boards unwilling to put National’s standards into their charters. They are doing this despite the blatant bullying by the Anne Tolley as the minister. They can’t see what the standards would positively achieve for their kids. Perhaps Tolley needs some education?

The Heart of Utoya

So Breivik has given us an eyes wide open gaze into the abyss. Chilling isn’t it? Much has been written in the last week about the political atrocity he committed, yet this article in the Sunday Star Times today is equally wrong. Here is why. Many years ago I recall listening to a BBC correspondent […]

Out of sight out of mind

Many other countries have cleared beggars from the streets in advance of big international sporting events.  Such a thing would never be needed in New Zealand though.  Would it?

Cooperation vs the tea party

Cooperation is one of the characteristics that defines humans in evolutionary terms. However true to their intellectually intransigent nature derived more from their enjoyment of a good old randian tantrum, the tea party is holding everyone to ransom. I suspect that the republicans are not going to like the consequences because voters value cooperation more.

I/S at No Right Turn on the public’s perception of the management of the economy, and National’s “dismal non-performance “.

On paper Labour is doing everything right, but they are not yet getting traction in the polls.   Labour needs to get voters’ attention again, and then their trust.  So how to “reconnect with the public”?  What should Labour be doing differently?

I/S at No Right Turn looks at the arguments for lowering the MMP threshold instead, or as a trade off for, getting rid of the ‘win an electorate, win list MPs’ rule. The conservatives say that a low threshold would mean more parties and ‘instability’. I/S shows that’s not only mathematically false, it’s not a reason to deny people democratic representation.

The media are reporting the chance of the US defaulting as a ‘debt crisis’, as if the problem is too much debt and people won’t lend to them. It’s not. The US is still borrowing at half the cost we borrow at. The problem is the debt ceiling. A purely political invention that lets lawmakers cut taxes, add spending, and then refuse to allow the resultant borrowing.

Rightwing violence fetishists are exploiting the Norwegian terror attacks to call for looser gun laws. ‘If only one of those teenagers had a handgun to take on the drugged up zealot with the automatic rifle’. Fact is, the ‘guns save lives’ myth was destroyed by the Tuscon shooting earlier this year. The armed bystander there nearly caused more innocent deaths.

Some are linking Labour’s polling to National’s in 2002. Well, I think it’s worth remembering the other side of the 2002 polls. Labour’s support plunged 13% in the last month of the campaign from 50%+ support to the point where a Nat-led government was a real threat. Then, there was 1996, where Labour went from polling 4th to losing by a hair. 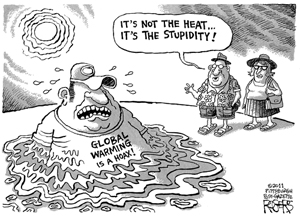 On a road to nowhere

The government has put out a new policy statement on transport. Total funding is unchanged. But cost of the RoNS is rising before they’re even built. So, it’s more money into white elephant highways. Less money for road safety, local roads, road policing, and public transport. Stupid myopic policy.

National has handed Telecom a new monopoly to replace its old one. As landlines go the way of the Dodo, fibre optic cable is the new natural monopoly, and we’re learning that Steven Joyce was talking to Telecom as far back as 2009 to ensure they go the lion’s share of the government handouts for fibre and a virtual monopoly in the market.

Did anyone else see the Herald article beginning: “A priest working as a senior executive at the Auckland University of Technology has resigned after “accounting discrepancies” involving hundreds of thousands of dollars.” and think “the money was just resting in my account“?

Last week, Jim Anderton said that the tidal wave of youth unemployment we’re experiencing will lead to more suicides. He’s right. The best response from the Right: slash young people’s wages and that might create a few more jobs. But Te Ururoa Flavell’s suggestion to ostracise and condemn the dead is just as bad.

Much ado in the commentariat about the latest Farifax poll, another poor result for Labour.  But some of these commentators could do to brush up on their history…

A classic from stuff:

Prime Minister John Key said the Government had had very little room to move on the economy.
”The public recognises that the rest of the world isn’t in great shape and so New Zealand is having to contend with that global environment,” he said.

Every US dollar we make in exports is worth 17% less in New Zealand than 4 months ago. Gonna get worse. How long’s this sustainable?

US brinksmanship takes us all to the edge

The Republicans are playing chicken over the debt ceiling. The idea is to win as much as possible in spending cuts and permanently shrink the government  by appearing more willing to go over the edge than the Democrats without actually going over. But does the Tea Party faction understand the game, or will they block the last minute compromise?

Too many hungry kids

Growing our own Breivik

Just after Irish has discussed how little it takes to jump from the violent language of the NZ Right to the violent actions of Anders Breivik (and an ‘expert’ had said it can’t happen here), we learn of a rightwinger who planned a van-bomb attack on ACC. The striking thing is that his online rants are unremarkable within the Right’s discourse.

Why Key’s opportunism was sickening

The Right is whining that Key said “If [the Norway massacre] is an act of global terrorism, I think what it shows is no country large or small is immune from that risk and that’s why New Zealand’s played its part in Afghanistan” . ‘IF! Don’t you see, IF!’ Try to get the point, righties. Key opportunistically framed a tragedy for his political purposes.