Bill English has failed his first test of real leadership. As world leaders, civil rights organisations and mass protests in America push back against Trump’s Muslim ban, English’s response is meek at best:

Prime Minister Bill English has for the first time criticised US President Donald Trump’s controversial Muslim ban, saying discriminating against refugees and migrants is “not the New Zealand way”.

Weak and reluctant – it took him about 36 hours to come up with that.

Asked whether he thought Trump was a bigot, English said that was “for others to decide”, while he denied the Government had been meek in addressing the issue.

Is that leadership? On the back foot, English is defensive:

‘We are not being meek’, Prime Minister Bill English says on Trump travel ban

Yeah you are, that’s why the media are pressing you about it.

English said the policy appeared to have created some chaos in the short term.

The actual quote is:

“It has caused some real chaos in implementation, that’ll probably work itself out”

So, no problems with the principal of a Muslim ban? All right then.

Compare and contrast with Andrew Little:

NZ must reject ‘poisonous prejudice’ of Donald Trump’s Muslim ban
…
That all makes United States President Trump’s decision to block people from certain Muslim countries and refugees from entering America all the more abhorrent. It marks a massive leap backwards for humanity.

All that we have learned and all that we have gained from developing a deeper understanding of people who act, look and sound different from ourselves has been tossed on the bonfire of populist rage.

It will do nothing to make America safer; it will make the world a more dangerous place. The targeted nations will retaliate. It will drive alienated young people into the arms of the terrorists.

Sadly, some people will follow the President’s lead and take out their anger on people for no other reason than that they are different.

New Zealand must say no to this poisonous prejudice by doing two things.

First, we can demonstrate our humanity and rejection of Trump’s policy by increasing the number of refugees we embrace each year to 1500.

Second, our Prime Minister Bill English can honour our tradition of standing up to bullies by publicly condemning Trump’s Muslim ban. He wouldn’t be sticking his neck out. Plenty of world leaders have already spoken up.

In a world of turmoil when we seem to be going backwards at an alarming speed, New Zealand must stand up and be counted amongst the mature and civilised nations who know the only way forward is tolerance. 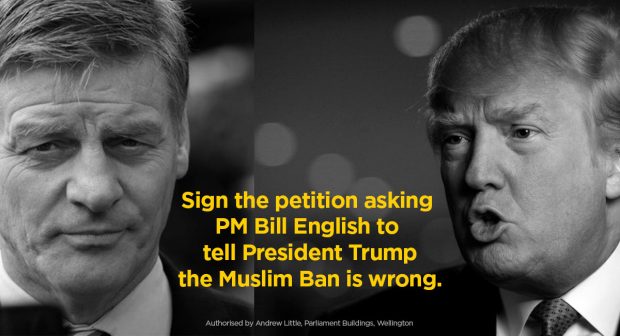 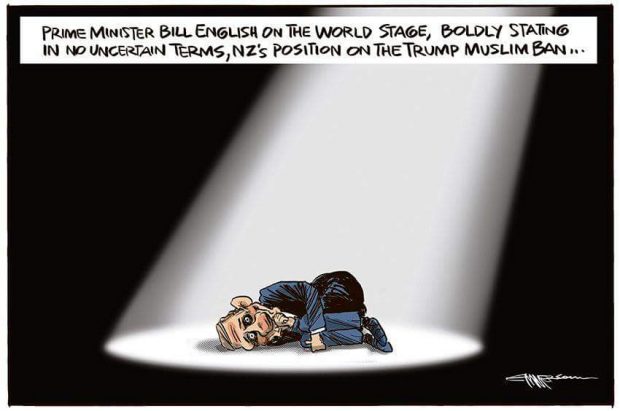 Imagine if this had been Kirk on Mururoa, Lange on nukes, Helen on Iraq or Tampa. English just doesn't have it. https://t.co/1jtOeNEeEP