Axe-grinders of the world unite…

Brokers and analysts, you have nothing to lose but your fees. (Never mind, there’s always the $200million Bill English and the Treasury have already slipped your way from the taxpayer.)

Following Labour and the Greens unforeseen announcement about NZPower,  a host of the usually uncontested financial commentators have turned Chicken Little, predicting the end of the world as they know it. Self-interest? Not a bit of  it.

I particularly noted Phil Anderson from Devon Funds Management on Morning Report today saying that the Labour/Greens intervention to produce a fairer market would spook the institutional foreign investors. No mention of priority for Mums and Dads any more in the Mighty River Power sell-off – it was all about those fat offshore fees going west in my opinion.

Now the North Korean line isn’t working Steven Joyce has turned to the axe-grinders for support, and named them in an extraordinary press release. They are all there – quoted as authorities by Joyce.

“Financial analysts including JB Were, Woodward Partners, Milford Asset Management, First NZ Capital, Devon Funds Management and Forsyth Barr are unanimous in their condemnation. One has labelled it a ‘hand grenade’ to the New Zealand economy, while others have said it will cut the value of every New Zealanders’ KiwiSaver account and lead to rolling blackouts. 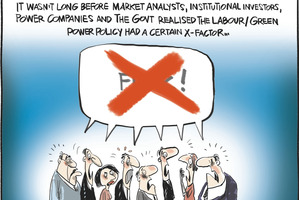 I think Emmerson‘s analysis in today’s Herald is much more accurate.

There couldn’t be a clearer indication (if anyone needed it) that Joyce and National are on the side of the ticket-clipping brokers and investors with money to burn, while Labour and the Greens with their plan to lower power bills  are on the side of the consumers who have to be careful about when they can turn on their heaters.

26 comments on “Axe-grinders of the world unite… ”