It’s the first day after summer recess, and MPs are preparing to vote on a bill proposed by Labour’s Hilary Benn, supported by members from across opposition parties and rebel Conservatives. That bill will attempt to extend the date of Brexit to January 31, 2020 in the event of no deal being agreed or passed through Parliament. If the bill passes Boris Johnson is expected to call a general election. 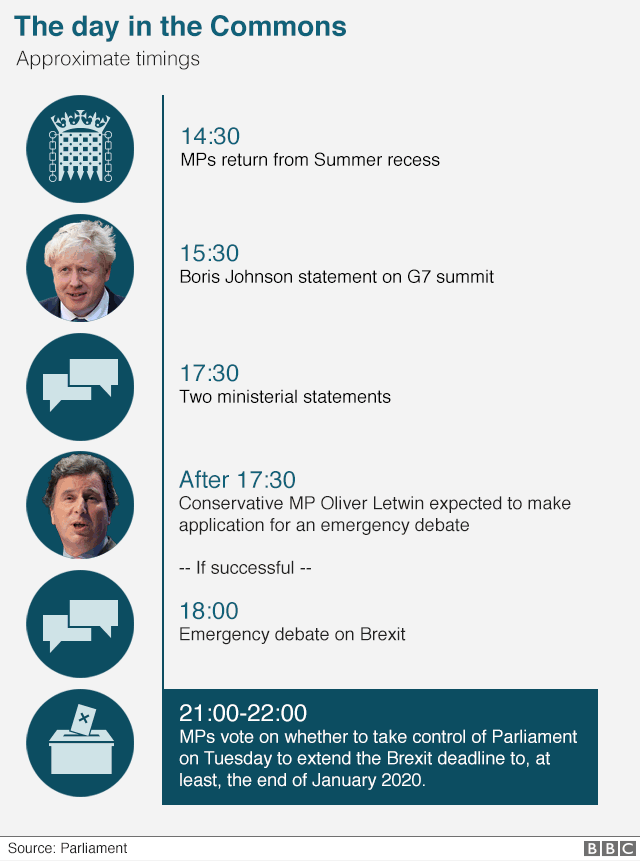 Brexit: Boris Johnson fails to win over Tory rebels in meeting at No 10 ahead of key vote – live news

Questions being asked about how Labour can vote for a General Election tomorrow and stop a No Deal Brexit.

It looks like it can be done because of clever drafting of this afternoon’s motion to take control of the parliamentary timetable.

1/….
As per @cgwOMT recent tweet, this afternoon’s motion – if passed – will prevent the Government from proroguing Parliament this week because it takes control of NI Executive Act and prevents a debate on the act before Monday.
The NI legislation was passed before the summer recess to prevent prorogation of Parliament until MPs had been given an update on progress to restore the power sharing agreement.

That’s down for Monday.

And today’s motion means that update cannot be provided before Monday.
Which gives those wanting to stop a No Deal Brexit until Monday to pass a new law mandating the Prime Minister to go back to Brussels and seek an extension to Article 50 until January 31st.
In other words, when it comes to having a general election and stopping the UK leaving the EU without a deal on October 31st, it does appear Labour can have their cake and eat it.

Having won control of the legislative agenda on Tuesday night,lawmakers moved quickly on a bill that would rule out Mr. Johnson’s plan for a withdrawal by the end of next month even if there is no deal, which many say would cause chaos. On Wednesday afternoon, by a vote of 327 to 299, they pushed the bill through a second stage in the two-step process.

The bill now goes to the House of Lords, which must give its assent.

After a night of extraordinary theater in Parliament, Mr. Johnson confronted on Wednesday a bleak scene scattered with the remnants of his Brexit policy, raising the possibility that the issue could destroy his premiership just as it had the two previous Conservative prime ministers, but more rapidly.

In the course of Tuesday evening, the prime minister lost control of Parliament, and with it his oft-made promise to carry out Brexit, “do or die.” He also possibly fractured his Conservative Party by carrying out a purge of 21 rebel Tory lawmakers who voted against the government. And he saw his plan for a swift general election being resisted by his opponents.

And Boris wants to have a new election, however he needs a 2/3rds majority in parliament to call for one.

Another product of his take-no-prisoners approach has been an erosion of trust. While he needs the Labour Party’s votes to reach the two-thirds threshold required in Parliament to call an election, its leaders are deeply suspicious of his motives.

The prime minister has said an election would take place on Oct. 15, but they worry that he will invent an excuse to move the date closer to the Oct. 31 deadline for leaving the European Union — or even after that — at the very least leaving no time for legislating after the balloting.

Determined not to “walk into a trap,” as the Labour spokesman on Brexit, Keir Starmer, said on Wednesday, the party is refusing to back Mr. Johnson’s call for an election until legislation ruling out a no-deal Brexit becomes the law of the land.

Mr. Starmer said Labour would not vote for an election on a promise from Mr. Johnson “that it will be 15 October — which we don’t believe.”

Bearing in mind the chaos that is the Brexit process in the UK and the political tactics that Boris Johnson has been employing, it is hard to disagree.

CNN: Running a live update – including the video of the UK parliament

After a short address from the Prime Minister, lawmakers in the House of Commons are debating whether or not to hold a snap general election on Tuesday, October 15.

0837 And Boris Johnson just lost the 2/3rds majority vote to have an election. Very low vote.