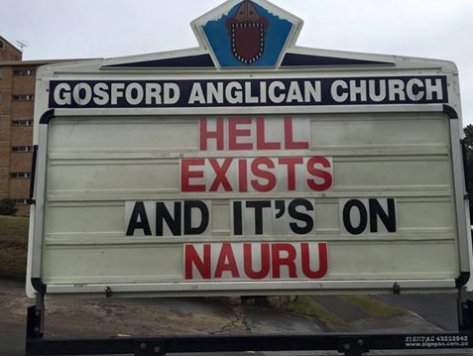 Yes you read this correctly.  One of the writers on The Standard, the blogsite erroneously reputed to be the cause of David Shearer’s demise as Labour Party leader, wishes to praise Shearer in the way he has talked about the Nauru asylum seeker detention crisis.

Documents leaked by The Guardian last week detailing sexual abuse of children in the Nauru detention centre “shocked us all”, he told Q&A on Sunday.

But the conditions in Nauru are just one of the issues facing asylum seekers – the other is that they’re there for the foreseeable future, according to Mr Shearer.

“(The reports) highlighted the fact that this policy is unsustainable, I mean it’s almost like Australia has lost its moral compass in terms of where it’s going,” he said.

“I really do think New Zealand, however it can, should make the offer to say “look, what is it we can do to short-circuit this and bring these kids’ (detention) to an end”.”

The documents obtained by the Guardian are awful.  They present a chilling synopsis of the horror of life in a detention centre and what is happening.  How a nation state can treat human beings like this is beyond reason.  How Australia, a Commonwealth Nation with a supposed commitment to human rights, could have set up this particular regime is something that it should be ashamed of.  Well done David Shearer for saying this clearly and precisely.

It is regrettable that the media has recently given more attention to other matters.  They have been criticising Andrew Little for stating that a Labour MP should not attend a meeting that was potentially beneficial to a non Labour member in competition with a Labour candidate in an upcoming election.  Strange really.  The guest list was hardly Labour Friendly.  As well as former member and Wellington Mayoral candidate Nick Leggett there was also former MP and likely future New Zealand First MP and recipient of a plum Government appointment Shane Jones and also Phil Quin.  Quin has spent the past decade running down the Labour Party and he even expressed the view once that Helen Clark should have been deposed as Labour leader early on in her career.  I am not sure why he should qualify as a Labour insider.

The critics claim that Labour is obsessed with identity politics.  Funny really because I agree with Morgan Godfrey that pretty well all that Labour has been concentrating on lately is the housing crisis, free education, the future of work … these are hardly “identity” issues.

To be fair to Quin his comments about Australian Politics with regards to Nauru described the situation well.  He said that the issue had become “politically weaponsed” and described how public opinion was totally against doing anything humane.  Dominant public opinion is apparently to the right of Tony Abbott’s views …

The left should be taking a stand however.  Quin is right that the stance taken by Labor is morally abominable.

Any way well said David Shearer on Nauru.  The Australian Labor Party should be very ashamed …

10 comments on “In praise of David Shearer ”