The overturning of Rowe v Wade has made the politics of abortion become topical throughout the world.

In New Zealand the response from Labour was pretty quick and to the point.

“Watching the removal of a woman’s fundamental right to make decisions over their own body is incredibly upsetting,” she said.

“Here in New Zealand we recently legislated to decriminalise abortion and treat it as a health rather than criminal issue.

“That change was grounded in the fundamental belief that it’s a woman’s right to choose. People are absolutely entitled to have deeply held convictions on this issue. But those personal beliefs should never rob another from making their own decisions.

“To see that principle now lost in the United States feels like a loss for women everywhere.

“When there are so many issues to tackle, so many challenges that face woman and girls, we need progress, not to fight the same fights and move backwards.”

And Chris Luxon?  Not so much.

His initial statement was that it was not an issue for New Zealand.  From One news:

In a statement on Saturday afternoon, Luxon said the US court ruling was “not a New Zealand issue”.

“Roe v Wade is an issue for the American people who have a different set of constitutional arrangements than New Zealand. It is not a New Zealand issue,” he said.

“We respect that amongst the public and within all political parties there is a range of views on this sensitive issue. That is why abortion laws have always been a conscience vote in the New Zealand Parliament.”

But he was forced to take further action after being undermined by Tamaki MP Simon O’Connor who in a deleted social media post expressed the view that it was a good day. 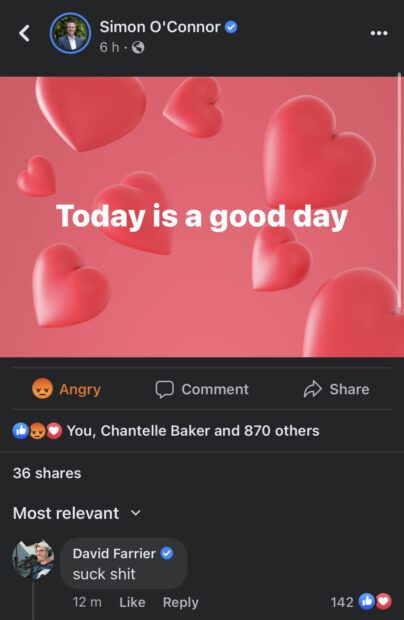 Then Luxon tweeted this:

Roe v Wade is an issue for the American people who have a different set of constitutional arrangements than us. NZ’s abortion laws were voted on and ultimately settled in the last parliament. These laws will not be relitigated or revisited under a future National government.

He obviously saw the need to say that our abortion laws were “ultimately settled” by the last Parliament.

The language had the same level of passivity as the comments of Gorush, Kavanuagh and Barrett who in their senate confirmation hearing each used soothing passive language to create the direct impression that they would not overrule Rowe v Wade.

Luxon then chose to make a third statement in the hope that the issue would be finished.

Another statement from Luxon, restating and clarifying earlier tweet.

This is the third statement in 24 hours (first was sent to media queries on Sat, second was tweet).

Never good when you have to clarify yourself so many times, but a sign of Luxon wanting to neutralise issue https://t.co/66QWQH67Vt

This is an important issue for Luxon.  He has said previously that abortion is murder and his fundamentalist christian leanings are well known.

But you have to wonder about his internal sense of morality.  Should someone who thinks that something is murder dismiss doing anything about it because it may hurt his election chances?

This has come at a bad time for Luxon.  And if you think that National MPs in a future National Government will restrain themselves and not seek to change abortion laws through private members bills then I admire your optimism.

103 comments on “Christopher Luxon’s many and varied abortion takes ”