Last night’s TVNZ poll, conducted by New Zealand’s least reliable polling company, showed National gaining ground, Labour down in the dumps and the Greens dropping out of Parliament. The poll had Key leading Clark as preferred PM by 35-29, and the narrative focused on Labour’s failure to gain any traction from its recent attacks on John Key. 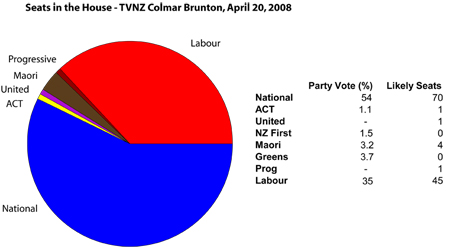 TV3 tells a different story. Labour is up, National is down, and Key has slipped six points in the preferred PM stakes to trail Clark 32-29. The Greens are safe and Parliament is split right down the middle between Left and Right. 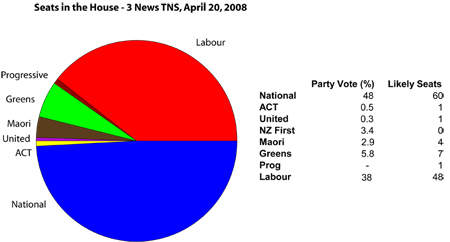 I guess the lesson here is to not put too much stock in individual polls. The media outlets that commission these polls have a commercial interest in presenting them as meaningful, but there’s no need for the rest of us to join in their charade. Instead, we should see polls for what they really are: a bit of fun for political junkies and a useful indicator of trends over a period of time.

And, of course, a handy gimmick for a news media more interested in low-grade scandal and superficial puffery than any meaningful political analysis of how each party’s policies will affect the lives of ordinary New Zealanders.