I’ve refrained thus far from commenting too much on here about English politics. Having moved to the country in September I felt it appropriate to sit back and observe for a bit. But having just gone through and voted in the recent council elections I have a few observations. 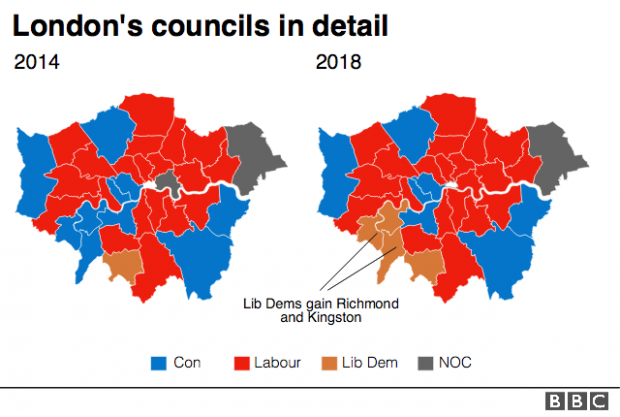 Firstly unlike New Zealand, in the UK councils are very much more party political. So councils have Labour, Conservative or Lib Dem majorities. This is a refreshing change from New Zealand. There you get 10 candidates tell you how much they love Upper Hutt, and if you’re lucky their opinion on fluoride in the drinking water. Ultimately you have no idea what these candidates stand for, and many just don’t bother voting as a result.

The downside to Party Political council elections is that the media interest is primarily what the impact of local council elections on national politics. This has included projections for how many seats each party would get in the house on commons based on these results, despite the fact that not all councils were up for re-election. More importantly, while some will be voting on party lines, many others are likely to vote on local issues. Someones vote in council elections may not reflect how they would vote in a general election.

Many are saying that Labour did not perform as well as expected in the council elections, both in London and Nationally. Some are now saying that the country has reached “peak Corbyn.”  Ex spin doctor for Tony Blair Alastair Campbell believes Labour are “a long way from power” (though of course Campbell is still struggling with the fact that its no longer 1997 and his era of politics is long gone).

The response to this by Labour and Momentum has been that they actually had a successful election. The counter argument is that this was best election result for Labour in England since 1971. The issue was that target councils such as Chelsea and Kensington were held by the Conservatives despite that councils handling of the Grenfell Tower fire. Polls earlier in the year did show a Conservative loss in Chelsea and Kensington was possible. Labour and specifically Momentum talked up the prospect of Labour winning this council, along with Westminster and Wandsworth. The reality is these councils have been Tory strong holds since the 1960s, so building expectations that Labour could win there was optimistic. Also the Conservatives clearly campaigned hard to retain this and neighbouring Westminster Council.

The other factor is the First Past the Post voting system. In Wandsworth Labour won slightly more votes than the Conservatives, but the Conservatives retained control of that council. In Richmond the Liberal Democrats won over 70% of seats with fewer than half the votes. Apart from the Electoral Reform Society there has been little comment about this. A better electoral system would help achieve better representation and results that actually reflect the will of the people. Hopefully this changes for future elections.