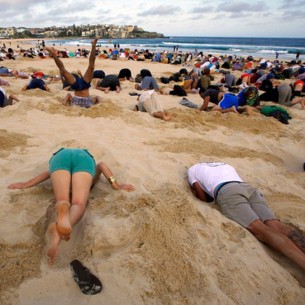 I kid you not.

Tim Groser and National have a plan to solve global warming so cunning you could put a tail on it and call it a weasel.

The plan apparently is the only game in town and it is hard line.  And according to Groser unless the world agrees to New Zealand’s proposal there will be no agreement.

Countries will be obliged to set targets but not obliged to meet them.

These are the pearls of wisdom that have come from the one person who can solve the world’s climate change problems.

“So the problem here is this. China, which is now the world’s largest emitter, although doing very serious things now in this space, is never going to commit to meeting a target and if it fails, be accountable legally for failing to do this. They will, however, do serious stuff. Therefore, the United States, given the Congress, will never agree to a different legal structure to China.

“So my view, and it’s a real hard-line view here, I think it’s a black and white situation. This deal will be based on the underlying concepts of the New Zealand proposal or there won’t be a deal.”

Apparently the problem is that all the pressure went onto the European Union and other countries that signed up to Kyoto like New Zealand, Australia, the United States, Canada and Russia.  Coincidentally these countries are most of the biggest producers of greenhouse gasses so this is not surprising but like rich people being asked to do something about poverty they are demanding that the poor share the burden.

Groser’s grand statements will not achieve this.  And as can be seen by the trends New Zealand’s performance is exceptionally poor and the chances of us meeting our historically agreed obligations are miniscule.

I normally try and be discrete and respectful in my blogging but climate change is one of those issues where my tolerance of stupidity is running low.  So let me say this as clearly as I can, Tim Groser is a muppet.

If you want to express your views on Aotearoa’s response to climate change you can with many others put your head in the sand tomorrow.  A more fitting description of this Government’s response I cannot think of.