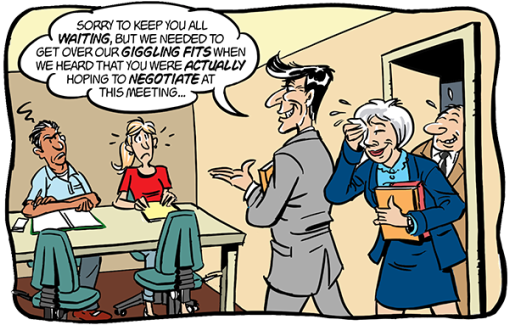 I wrote recently about how the Government’s changes to our employment laws will empower bad employers and reduce Kiwis’ wages and conditions. Over the coming weeks I’m going to go through each of these changes to show how, in contrast to National’s spin, they’re not just technical and they’re certainly not ‘fair’ or ‘balanced’.

The first is what National calls the ‘removal of the duty to conclude’. This basically means the boss will be able to say ‘no’ to a collective agreement and force people onto individual agreements with less job security and lower pay and conditions. You can see why it’s also known as the ‘Ports of Auckland clause’.

How does it work? It’s simple. Say your collective agreement comes up for renewal. You get together with your workmates and ask the boss to sit down with you and negotiate in good faith.

At the moment your boss has to work with you until you find an agreement. He doesn’t have to give you everything you ask for, but generally you’ll negotiate a fair increase that both sides can live with. It’s a system that delivers bigger pay increases and better conditions and it has a knock-on effect that benefits every Kiwi worker.

National’s new employment laws will change all that. Under the new law, if the boss doesn’t want a collective agreement he’ll be able to refuse to agree to one. If he’d rather put you and your workmates on an individual agreement so he can dictate the terms and pay then he’ll have a whole lot more power to do that too.

All the boss will have to do under National’s law is turn up to a few meetings, take a hard position he knows will never be acceptable to you and your workmates  (say, for example, turning you into a casual or cutting your pay) then refuse to negotiate any more when you don’t agree to it.

This is the so-called ‘protracted bargaining’ Simon Bridges is so keen to put a stop to – it’s workers refusing to take pay cuts or have their jobs casualised. Bridges’ solution is to let the employer go to the Employment Relations Authority and get a declaration to say that bargaining is over so that workers no longer have a say.

Once collective bargaining is declared to be over, industrial action will be illegal and there’ll be a sixty day ‘free hit’ period where the boss can go to people one by one and offer them individual agreements they’re in no position to turn down.

What does this mean for pay? Well, some workers might be able to get an increase in the first year if they accept an uncertain roster, a reduction in redundancy entitlements and a cut to penal rates. But once those conditions are all gone there’ll be nothing left to sell.

This is when real wages really start to plummet. It’s what happened in in the 1990s and it’s the reason New Zealand is a low-wage economy today. If we let the Government do this to us again we can expect the same result – lower pay, fewer rights, and another generation of Kiwis heading to Australia for a better life.

But there is an alternative. Unions are campaigning to stop these laws and build support for employment laws that support good jobs, a living wage for all and a real say on the issues that affect us at work. You can join the campaign at www.workrights.org.nz.

43 comments on “How National plans to smash collective agreements ”