It Is the Thought That Counts

A half-finished draft of this post had been lingering in my folder for over a month now so it was do or die now.

I know remarkably little about Jacinda Ardern. I have never met her in person and what little I do know about her is through the media lens and from what I read here on The Standard.

Most opinions and opinion pieces are on opposite poles of the spectrum, ranging between admiration, hero-worshipping and praise of almost angelic nature to character assassination and pitiful and spiteful criticism. Of course, there is no need to name the ‘opinion leaders’.

John Key was an enigma in terms of his enduring popularity that may have caused some to suffer from KDS – in many ways he was insufferable. Jacinda Ardern creates a similar conundrum between an apparently likeable personality leading a government that apparently fails to deliver. At least, it does not seem to live up to expectations, over-promised, and under-delivered.

The rhetoric coming from the CoL Government is frustrating many who consider themselves true lefties. The noises of relentless self-criticism on the Left are getting louder. The enemy of the good is the perfect.

Many say that Ardern’s kindness is personal and genuine. So are her words. She does do very good speeches; I have read a few. Many others say that it is fake and/or simply a well-polished PR exercise by an excellent communicator. Either way, her words appear aiming to inspire rather than direct. 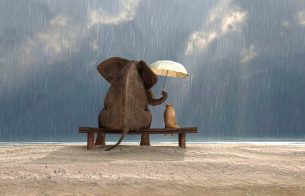 The PM cannot micro-manage others let alone a whole Government and the massively inert State apparatus. In the past, a few may have tried (Muldoon?) but with limited and/or short-lived success.

This is where things get unstuck.

How we think (and feel) determines how we phrase things. Think of the angel and the devil on either side of a cartoon character as the two inner voices that compete for attention and dominance. The voice that ‘wins’ determines the words we utter, their tone, inclination, meaning, purpose, and our (other) actions. Action causes reaction. Others respond to our words, our actions, and our behaviour and vice versa.

Act in kindness and with respect and this most likely generates a reciprocal response in kindness and (mutual) respect. This is essential when exploring the vast common ground and mutual interest in order to achieve consensus and converge on a solution or action plan that is mutually beneficial. In terms of ‘strategy’, this is the most (?) effective one to achieve things and work together. This is when we can expect to see real change instead of superficial window dressing and endless rhetoric.

Arguably, many of modern-day socio-economic, political, and environmental issues are horrendously complex and can only be addressed effectively (one hopes) through collective agreement and action, on a global and international level even. This, in turn, can only be achieved by breaking with tribal partisan politics of right and wrong and winners and losers.

Kindness in itself and by itself does not and will not solve anything. However, it is not the end; it is a means, a start and first step on a path to building and mending bridges and consensus, to make allies, if not friends, and work together in unison. Unfortunately, many have grown impatient or lost faith (and hope!). Many are not big on words but they want to see action, change, results, and today rather than tomorrow, next year or 2025. There may not be enough action but Ardern may be embodying something that appeals to many, particularly on the Left if the latest approval ratings are anything to go by – for a counterview, you only have to visit right-leaning blogs that purport to support free speech and read the comments there. Ardern’s kindness might be part of that embodiment. Action and results are important but they (have to) originate from somewhere and are usually the creation or product of labour by many.

Can you like someone whose policies or ideology you cannot stand? Difficult perhaps. Can you like them if they have no policies of substance, deliver little, or make few changes or only minor ones that don’t upset the status quo? Quite possibly. I think this might be part of the reason for the appeal of John Key and Jacinda Ardern; it is called political capital with the voters and people. Of course, for Jeremy Corbyn it was different and the media did not play any role in the intense public dislike of him; they were merely reporting and doing their job. Perception and feeling seem to trump reality. In more than one way, it is the thought that counts.

70 comments on “It Is the Thought That Counts ”