Currently in New Zealand, democracy is increasingly under threat.  The mainstream news media and professional journalists have an extremely important role to play in revitalising democratic processes.  However, with democratic decline and the neoliberal capture of the dominant voices in the MSM, disempowered voters are becoming increasingly disengaged from parliamentary politics. Today, journalists covering politics tend to serve power more often than the hold it accountable. Political bloggers, especially if connected to offline activist networks, also have an important role to play in political re-engagement and democratisation.

Due to the complexity of the factors involved, this is the first of a series of posts I will be making on this topic over the next couple of months.

In order to thrive, democratic society needs independent and diverse news media where those with power are scrutinised from diverse positions.   As Nicky Hager clearly explained, politicians and governments need to be questioned and held to account in a way that serves the public interest.  This includes,

the public service of investigating truthfulness in politics and of seeking facts when the truth is disputed, twisted or hidden. It can also involve a different kind of truth: trying to discover and illuminate what is right and wrong. In essence, it is about investigating and challenging the activities of the powerful …

For this to happen, the news media needs to be free of influence from the state and powerful commercial interests.

Currently our government is dangerously undermining democracy, making it harder than ever for the public to have their say on important decisions.  John Key presents a soothing and false face of calm and reassurance that the government is In control and is doing what is best for the country (as in his TV3 interview earlier this week).

Meanwhile his government have dismantled democratic processes in local government and abused the use of urgency at an unprecedented level, in order to ram through legislation without allowing full public and democratic scrutiny (monitoring of this systematic abuse was flagged by NRT in 2011).  This is has been particularly evident in the removal of local democracy: 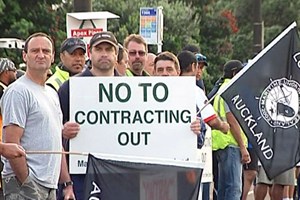 The media, the government, parliamentary systems and political processes all have a part to play in democratic engagement with the public (Miller, 2004*). When these combine in such a way that people feel powerless to influence change, increasing numbers of people stop voting and/or paying attention to parliamentary policies.  Many continue to be political engaged in areas where they feel they can have influence, such us through consumer boycotts, or community-based action.  This has been a general pattern across the English-speaking world, with New Zealand seeing a steady decline in the proportion of eligible people voting since 1950s (See Colin Hay’s much cited Why We Hate Politics, 2007: p.15) .

People stop voting when they feel their vote will have no influence: when there is too much focus on political game-playing (Comrie, 2012) and not enough focus on the detail of policies and issues, when pseudo-authority of name journalists over-ride the public interest, and when the neoliberal ethos of individualism leads them to believe that collective action will have no impact (Batin, 2008*; Hay, 2007). The decline in voting has been strongest in the age group with least power, the young.  Among the young (Edwards, 2009*), the people least likely to vote are the least influence: those from low income backgrounds, and those with least formal education (Henn et al 2005 *).

The dominant ownership of news media by powerful corporations and the rise of the Internet, have resulted in a skewed and inadequate “fourth estate”.  With the democratisation of news, back when newspapers became affordable and accessible to the working and low income classes, conventions developed to ensure news was written in an “objective” and impartial way.  This was because a democracy required that the public were well-informed before voting (McNair, 2009: p.33).   While total objectivity was never possible, it did provide some checks on the propagandisation and distortion of politics.

However, with the fragmentation of news and the increasing tendency for media ownership to be controlled by a few multinational corporates, the systems now used to ensure impartiality in news production have become counter-productive (UK OfCom Report cited in McNair, 2009: p.37).  Journalists follow some basic rules of impartiality and standards, but have lost the drive to serve democracy by speaking truth to power.

Since the rise of the “neoliberal consensus”, the MSM has come to more strongly represent the interests of the most powerful.  Sure they do stories on the poor and down-trodden from time-to-time, but such voices remain marginal within the whole fabric of the NZ news media-scape.  A similar process is seen in Australia, as argued by Tim Batin (2008*) in his critique of the 2007 federal election:

Australia’s political journalists, another elite group, have shown a reluctance to see much that is deliberate or rational in voters’ behaviour pertaining to disengagement, and are therefore not well equipped to recognise a change in the prevailing circumstances. Indeed, the vast majority seem to accept uncritically the broad direction of neoliberal policy.

This is more to do with the overall structure and priorities of powerful media corporations.  As argued in Brian McNair’s, News and Journalism in the UK: A Textbook 5th edit, news,

Th examination of media bias will continue in subsequent posts, but, for now, consider how little depth and critique of democratic process is in this Stuff article today on the government’s decisions to go ahead with selling 3 power companies next year:

Fresh from its court victory on asset sales, the Government is considering selling all three state-owned electricity companies next year.

Finance Minister Bill English linked the possibility of three sales to buoyant financial markets and the plan would also mean the most controversial sales were over before election year.

37 comments on “Media Bias & Democracy I: truth to power ”