National’s politicisation of Covid over the past two years

On Friday there was this big policy announcement by National where Chris Luxon announced National’s proposal for how the Government should handle Covid.  From the Herald:

National Party leader Christopher Luxon says it is time to dismantle Covid restrictions and get back to normality.

He spoke to media this morning with his Covid-19 response spokesman Chris Bishop after issuing a call for the Government to immediately scrap vaccine passes for all but large, indoor events.

In a statement this morning, Luxon also called for all scanning requirements to be dropped immediately and to get rid of vaccine mandates for all young people aged under 18.

He also called for a move to a five-day isolation period for Covid-19 cases and their household contacts, down from seven days.

The statement caused a sense of deja vu.  Haven’t they announced essentially the same policy many times before?

This caused me to do a deep dive of National’s previous announcements during the past couple of years and boy they have been all over the place.  The basic response has either to be loudly and indignantly claiming that we should loosen things up or acerbic criticism of the most transient fault by the agencies of Government.  This post is a compendium of different things I have said at different times.

We are now in a situation that we have anticipated but avoided for two years, a full blown local Covid wave.  We are in pretty good shape, vaccination rates are high and there are a couple of country comparisons to show how well we have done. 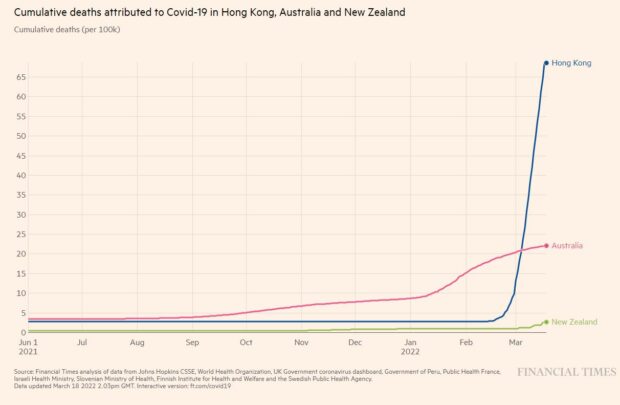 But from the noise that has emanated from National’s ranks and from its cheerleaders for the past couple of years you would think that the country’s performance was a disaster.

Like in February of this year when National wanted to end all border restrictions.

We think the time has come to end the misery of human lottery that is MIQ and essentially allow fully vaccinated kiwis in Australia and around the world to return and self isolate without going into MIQ.  That is the critical point.

Susie Ferguson then asked him if National would open up the borders “now”.

Bishop replied by contradicting himself and agreeing that it needed to be phased in.  From Radio New Zealand:

There was an argument for phasing in the changes, but the most pressing need was to get New Zealanders in very desperate situations home, from wherever they are in the world.

It is interesting that as Omicron was hitting us Bishop thought there was an argument for phasing in changes but now National thinks that the whole apparatus should be dismantled, every single piece of it.

This was also the month of the Wellington protest where Maureen Pugh gave the game away and admitted that National Party members had been meeting with the protestors on an almost daily basis.

In January of this year Chris Luxon criticised the Government for not having a comprehensive plan for dealing with Omicron.  Now he proposed there to be essentially no plan, apart from sick people staying at home.

Omicron then hit and with the benefit of hindsight the extra time we had to prepare and get more people treble vaxxed was very important.

In November last year National essentially wanted to let the virus rip because it was affecting their privilege too much.

Here is the video proof:

And here is the Hansard report:

If we step back and ask ourselves, having got vaccinated—we’re nearly 90 percent; over 90 percent of first doses. Our simple view is that we don’t need any of this at all anymore. We can move on to a stage where the vaccination rates are high, we don’t need traffic lights, we need to just open up and accept that people have had the opportunity to get vaccinated—most of them have—and let’s get back to a semblance of normality. So that’s why we oppose the bill. Full stop.

It also came up with a campaign to just open up for Christmas. 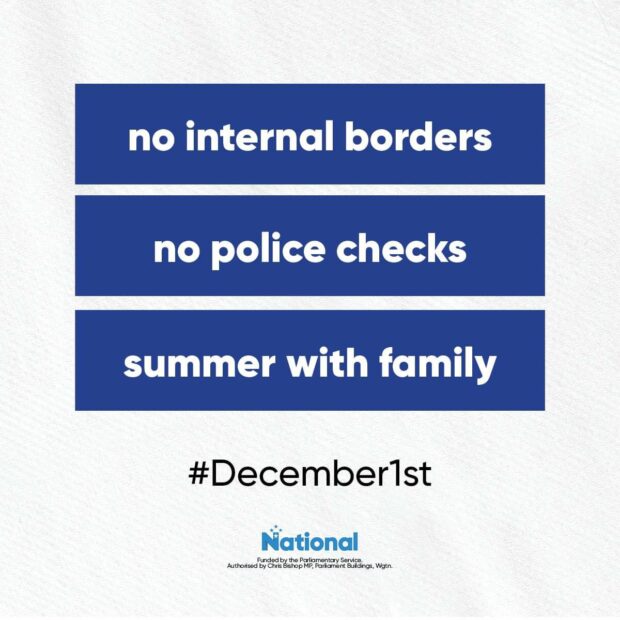 At the time I said “… in the middle of a pandemic where the numbers in hospital are increasing and a number of Kiwis have died from a virus that is spreading promising the loosening of current restrictions is the most irresponsible, stupid, foolhardy, idiotic, imbecile thing I could ever expect a political party to do.”

In October last year previous leader Judith Collins wanted the mandate dropped once the country reached a 90% vaccination rate.  I thought at the time this was crazy.  We did not know what the situation was at that time.  As shown by Japan’s response which has recently dramatically reduced new covid cases it is a combination of responses that are important.  Vaccinations by themselves will not suffice and we may need to draw on multiple responses to suppress the spread of the virus.  As it was Omicron hit us after we had reached the 90% vaccination level and if ever there was a time that we needed the extra vaccinations that mandates incentivised it was then.

In September last year National said that if 75% of the population over the age of 12 were vaccinated then we would no longer need lockdowns.  Three weeks later the figure was 70% to 75%.  A goal for adult vaccinations of 80% to 85% was also mentioned which is absurd given that in terms of first jabs we were already pretty well there.

During that month it also released its Covid opus.  Clearly the policy had been developed over an extended period of time.  How they must have hated it when John Key released his list of cafe reckons on the Sunday just before official release.  The problem with its proposal?  It admitted that our health system could not at that time cope with the subsequent run of infections.

This is the crux of it. Thanks to Dr Shane Reti for the medical clarity. pic.twitter.com/a49ei8ARsr

In August last year Chris Bishop admitted that he saw National’s role as not to ensure the best response to the crisis but instead to gum up the works.

In May of last year Chris Bishop showed that he was concentrating on the issues that mattered by complaining that doctors were trying to get too many vaccines out of a vial.

In April of last year (and for many months before then) National complained bitterly at how slow the roll out of the vaccine was.  History will show that our roll out was world class and that a phenomenal proportion of the population have been vaccinated.

In January of last year there was the great why has New Zealand not queue jumped and paid more to purchase Pfeizer vaccines debate.  Judith Collins asked why we were not being vaccinated as fast as other Western nations who were at the time struggling to deal with massive outbreaks.  Her complaint speaks volumes, if our world is going to deal with the virus then the distribution of vaccines have to be equitable and as a priority to those in need.

The election period of 2020 is but a blur.  And the result spoke volumes about what the country thought about National’s proposals.

Who can forget July 2020 when a then National MP made the allegation that a stream of covid infected Indians, Pakistanis and Koreans were on their way to Queenstown.

And that it was based on information supplied by this National operative? In June 2020 Todd Muller gave this speech where he urged the reopening of New Zealand.  From the Otago Daily Times:

“The New Zealand strategy cannot be that we stay locked up until everybody else gets to zero or we have a vaccine. This country would be on its knees if that was the case.”

Earlier in his brief leadership, Muller said the National Party believed Australian skiers should be able to come to New Zealand this winter.

But Muller said the “shambolic” response to testing people in quarantine of the past fortnight meant New Zealanders were now less willing to talk about how we might allow people to visit or travel internationally.

Muller did not last much longer.  Then Judith Collins took over.

The Government is currently considering a relaxing of the current settings.  Like Professor Rod Jackson I prefer that changes be kept to a modest level while we struggle handling the Omicron wave.

But the negative rhetoric that National has engaged in since 2020 has played a significant role in undermining public support for beneficial health measures and putting pressure on the Government to loosen up more than is ideal.

I can understand why people are so grumpy and worried.  It has been two long years and it does not matter how many times you point out how well the country has performed people are over it.  National’s continuous stoking of the fires of discontent is something that I will never forget and reinforces to me strongly how important it is to keep them away from the levers of power for as long as possible.