The Government is in negotiations with National to see if a consensus can be reached on climate change policy.  Judging by this recent contribution by Todd Muller published in Stuff the chances are not good.

He starts off with a chip at Generation Zero, why I am not sure, because Generation Zero have performed some outstanding, well thought through and compelling work. But Muller says this:

Despite the claims of Generation Zero, a pseudo-Green Party campaign machine which claims to represent the youth of New Zealand, the National Party has a strong track record on climate issues.

We are not a party of “climate villains” dragging our feet as they would paint, but rather a party of economic and environmental pragmatists who are taking a principled approach to climate change: allowing science to paint the picture, with technology leading the way, pacing ourselves at the pace of our competitors, and being relentlessly honest about the economic implications of the transition.

There is a lot to unpick in that second paragraph as well as a lot of rhetoric. From it you can safely say that one of National’s bottom lines will be that the economy cannot be damaged, that National wants to have its cake and eat it too. When will they realise or acknowledge that the economy depends on the environment stupid. There are no profits to be made in a destroyed world.

Muller describes National’s principles as “level-headed, pragmatic and measured approach that New Zealand would expect from National”. I would describe them as “rhetorical flourishes which refuse to acknowledge the severity of our current predicament”.

For instance why pace ourselves at the pace of our competitors? This means setting our pace the same as the shirkers and climate change deniers of which there are far too many. And the current trajectory is very scary. Everyone needs to do more.

And being relentlessly honest? This from the Government that was prepared to use fraudulent carbon credits to balance the books?

Muller then engages in rhetoric that Crosby Textor would have been proud to have called its own:

National is proud of its record on climate issues, but those who are dead set on New Zealand always moving harder and faster no matter the cost, often under the guise of “ambition”, will never let the truth get in the way of a good story.

Who would have thought that emissions didn’t increase under National, but stabilised and then reduced by 2 per cent? Emissions are lower now than they were in 2008. This is compared to a 27 per cent increase between 1990 and 2006.

I am not sure how his figure was arranged at although I am sure there is a particular set of data National will use to back the claim.

There is some data here which suggests that decreasing sheep numbers had an effect as did the Global Financial Crisis. Whatever the cause a 2% decrease is nothing to celebrate.

And the outlook is pretty dismal. 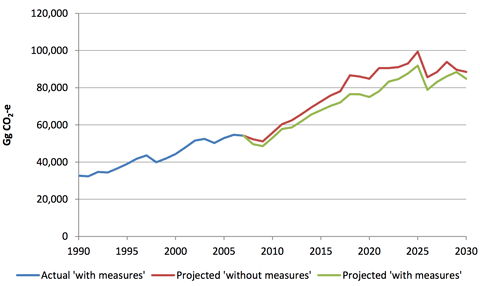 And policies tend to have long term lead in times. The last Labour Government set an energy policy of 90% renewable by 2025 and started to implement this. National opposed it and tried to sabotage it. But according to Muller National is to thank for the change:

National increased our renewable electricity generation from 65 per cent to 85 per cent and implemented a world-class Emissions Trading Scheme that can be held up positively against any other trading scheme in the world. It covers more sectors and gases than the European ETS does – going further to include industrial methane, transport fuels and forestry.

As for the ETS if by “implemented” Muller means “sabotagued” then he has a point. Otherwise this is one big porkie.

Muller then accuses this Government of being radical environmental economy wreckers and of doing nothing different to the last Government within the space of two paragraphs:

Despite the Government’s virtue signalling and trumped-up rhetoric on climate issues, their actual policy response hasn’t been significantly different to that of the previous Government – in fact, the changes to the ETS currently being finalised were initiated by National.

The key difference in policy has been the Labour Government’s ban on oil and gas exploration – a change of direction that the National Party continues to oppose vigorously. This decision was pure politics with the Government’s own officials advising that banning oil and gas would cost our economy billions of dollars and likely lead to an increase in global emissions.

When will he realise that we need to leave new discoveries of oil in the ground and stop building highways if we want to become carbon neutral?

And finally Muller repeats the claim that to preserve our environment we have to wreck the economy. And that we are too small to matter.

Modelling provided to the Minister for Climate Change by NZIER indicated that achieving an all-gases zero emissions target by 2050 would reduce New Zealand wages by 60 per cent and GDP by 40 per cent. This may be palatable to Generation Zero, but I doubt the rest of New Zealand would agree.

When our total emissions account for 0.17 per cent of total global emissions, leadership isn’t being first, fast and famous. Leadership is taking what we already do well, food production, and doing it even better over time by investing in innovation and technology.

The technology claim is a joke and is something that the last Government used to talk about all the time.  For instance in 2015 I wrote this:

[John Key claimed] that within three to four years New Zealand’s scientists will have nailed the science regarding agricultural emissions of greenhouse gasses. From TV3:

“I am actually quite confident, over the next 10, 20, 30, 40, 50 years, the world will adopt so many new technologies actually our carbon footprint will reduce.”

Agriculture contributes 48 percent of New Zealand’s carbon emissions, but Mr Key said technology to address that is not far away.

“My scientists tell me within three to four years they are going to have nailed that.”

Hosanna, hosanna, hosanna in the highest, redemption is at hand.  John Key has the solution to Aotearoa’s greenhouse gas emission issues.  Is this why National has slashed funding of research into agricultural emissions? Because they have already discovered the solution?

Four years on and there is no sign of Key’s lauded technology appearing.

The first comment to Muller in the Stuff article nailed it:

Know a fence, Todd Muller, but I could give two shiny tosses as to what “all Parties can live with”.

If you’re more concerned with the happiness of “the parties” and not concerned about the wellbeing of the citizens in the country your desperately seeking to govern then I think its time you go get a job in American politics and stay far away from here.

But the chances of a political accord on climate change being reached are?

The portents are not good.

Update:  This is a more recent graph that I have discovered which can be accessed from MPI’s website here.  The net emissions figure is obviously the most important one.