The political graffiti are now writ large on the wall for Rodney Hide’s leadership of Act after the apparent Easter rising within the party. Hide has to go.

ACT is now so discredited that even some on the Right Wing are likening Rodney Hide’s stand in Epsom to Hitler’s last days in the bunker.

Why not Brash in charge with Hide in the mix and some pragmatic agreements on joint decision-making around candidates, policy and image? That would require Hide to swallow his pride, but if he really wants the best for his party and he fancies a future that includes a ministerial portfolio, he must use his political brain and make the deal.

And then this wee gem:

ACT president Chris Simmons believes leader Rodney Hide has enough support in the caucus to stay, but says the board would not stand in the way of a change if MPs backed Don Brash’s bid for the leadership.

Right now the only thing standing between Hide and political oblivion are John Boscawen and Hilary Calvert. 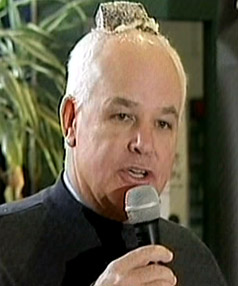