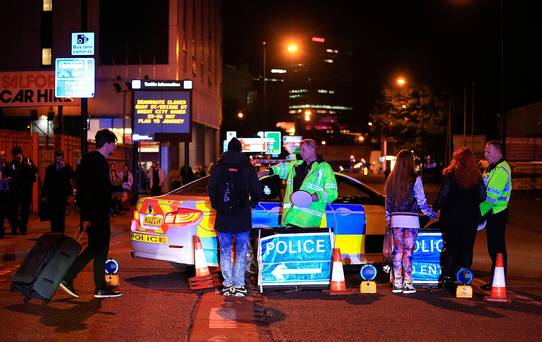 Terrible news from Manchester where it appears an explosion may have killed at least 19 people and injured many more.

The Guardian’s live feed is here.  The assailants or their motivation are not known.

This post will be updated as more news comes in.

Police have confirmed that 22 are dead and at least 60 injured.

The explosion was the work they believe of a single suicide bomber who used bolts and nuts as shrapnel.

The major parties have suspended campaigning.

Salman Abedi was named by police as the suspected suicide bomber who killed 22 people and injured 59 at Manchester Arena on Monday night.  He was born in Manchester from a family of Libyan origin.

A beautiful response from a local.

"They want us to turn on our neighbours and it will never happen" – blood donor Ian in Manchester, via @BBCNewsnight pic.twitter.com/vdPLbebcTy