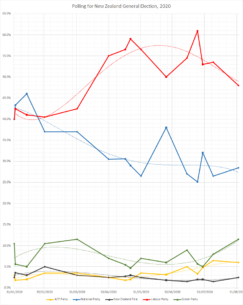 Hi all, sorry about missing the post for the previous Roy Morgan poll– I’ve been having connection problems for a wee bit over a month that just hit at the wrong time for me to be able to write a post for that one, and my phone’s internet wasn’t stable enough to send off a post unfortunately, even though I had it drafted. I did manage to get the results onto Twitter if you want to see them. Was intending to catch up yesterday or today and post my draft with images and proper metadata, but we’ve been overrun by the new Roy Morgan results, so why don’t we skip ahead straight to the new one.

It looks like just under a month out from the delayed election date, we’re finally getting some narrowing of the poll results, with Labour under 50% for the first time since March, but still within shooting distance of a majority government- the line for this varies based on how much of the party vote is given to parties that don’t enter Parliament, but the plurality winner (largest result winner, so in 2017 this was National) of the party vote getting below 47% is usually a pretty safe line to call it an expected minority government.

As Roy Morgan doesn’t run a seat calculation on their results, I’ve done that for you on the left. This represents the single most likely result from this poll, if we trust its methodology. As usual, I should point out that although the Roy Morgan was our second most reliable poll in 2017, it consistently overpolls the Greens compared to the other two polls, and is likely overestimating their support significantly here. This difference has become more dramatic in 2020 polling, and while it’s possible Roy Morgan is the one that’s more accurate about the Greens, I disagree with that idea based on past performance. That said, despite some people’s dismissal of the Roy Morgan poll, it is the only poll that sticks to a regular timeline, and it was actually more accurate than Colmar Brunton (TVNZ) overall, when you compare it to the closest timed Colmar Brunton poll for the 2017 election, meaning it arguably comes in second of the three big polls. Roy Morgan, like Colmar Brunton, polls using phone cold-calling. 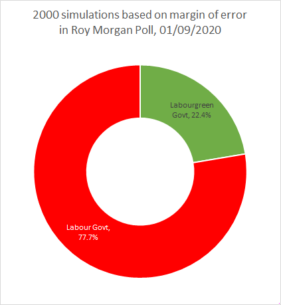 Onto the party vote- at 48%, Labour is no longer guaranteed a majority government- there is some chance their actual support falls below that magic margin to get a majority government, so the narrowing has brought us back into interesting territory here again. Note that the chance for a Labour-Green government just relies on the Greens being over threshold, (which is 100% based on the party vote support given, and would be even if we assume RM is over-reporting on the Greens by a full 4 points) not on their actual level of support. Any over-threshold result in those 22.4% of simulations gives us a Labour-Green government, showing that Green support is critical right now if we want a result that requires Labour to be accountable to a coalition partner. National is clearly hoping it can knock the Greens under threshold to move the overton window a bit further right based on recent attempts to further outrage over the Green School decision, and there have been questions of whether New Zealand First is leaking on the issue, too.

In this analysis, ACT were under threshold in 9.2% of simulations, and New Zealand first in 95.6%, meaning they are extremely likely to be over and under, respectively, when the trend is taken into account. Based on actual polling data, I do not consider a Northland win for Shane Jones worth considering at this point, meaning NZF must be over threshold to win seats. 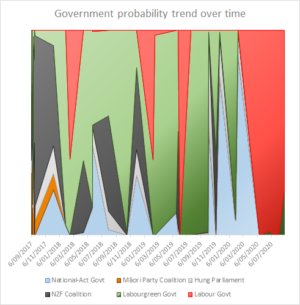 The trend is still very solidly left-wing at the moment, with only a few blips based on outlier polls even bringing National into significant contention during Ardern’s entire time governing. We’ll see if things close any further for National during the remaining month of the campaign, but at this stage I’m personally more concerned about the composition of the expected left-wing government. While I’m happy to have New Zealand First gone under current polling, I consider it a very good thing we’ve not yet seen a majority government under MMP.

Roy Morgan don’t disclose the exact fieldwork dates on their poll, but do tell us notable recent events that are covered:

“Interviewing for this survey in August encompassed the period including the enforcement of Stage 3 restrictions across Auckland following the renewed outbreak of COVID-19 in the city and the decision to postpone the election by four weeks.”

Based on this, I think it likely that this result excludes the recent Green School controversy, and we should certainly wait for the next Reid Research (Newshub) or Colmar Brunton (TVNZ) poll to inform where we think the Greens are at anyway.

On individual MPs, here’s how the party lists look when I run this result through my model for electorate shifts: (List continues in order until last winner)

(Remember as above, this result likely inflates the Green vote)