Religion and the threshold

It has been quite amusing watching a new generation of journalists waffling on about possible religious parties maybe entering parliament as offside stooges for National. Don’t these dimwits ever look at history?

Religious party – please meet the threshold… It is 5%, or if National is feeling generous – National giving up a seat and actively campaigning against their candidate like they do in Epsom. Either way it is unlikely to work well, even for National – the most likely beneficiary.

For instance we’ve been through this performance before with the church of density. Wikipedia has a pretty good summary.

Richard Lewis, a member of Destiny Church Auckland, formed the Destiny New Zealand political party in 2003. The party first ran candidates in 2005. Candidates from four different churches joined with candidates who came from Destiny Church. Despite Tamaki’s prediction that the church would rule New Zealand by 2008, the party’s 42 candidates gained only 0.6 percent of the vote. This fell well short of the five percent threshold required to enter Parliament without an electorate MP but proved the best performance of any party that failed to enter Parliament.[34] In 2007, City Impact Church and Destiny Church collaborated in the establishment of the “Family Party”, but the latter won just 0.35% of the party vote in New Zealand’s 2008 general election and dissolved in 2010.[35]

But if you look at the history of specifically religious parties in NZ it really is a history of abject failures, splits, mergers, and bloated egos failing to work together. Wikipedia has this classic diagram of “Chart of New Zealand Christian political history as of 2014, showing mergers, splits and renamings“. You need it to even keep track of the romantic couplings and divorces. 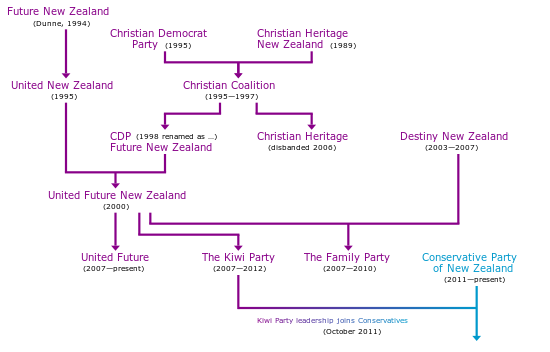 Actually the only significiant party with a religious component I can recall getting into parliament during my lifetime was United Future. That was an interesting hodge-podge of religious and special interest groups. For those who lost it in the sea of beige, the ‘Future’ bit was the religious side, while the United bit was a previous coalition of centre political careerists. But that is what it appears is required for our christian conservatives to get a religious party into parliament.

This is hardly surprising. New Zealand is quite strongly non-secular. When you look at the censuses, this becomes pretty clear. From Wikipedia again a summary of the gross religious trends from the census.

And of course that doesn’t really highlight the reality of segmentation. For instance, with the Christians if you look at the wikipedia link, you’d find that the bulk are Catholic or Anglican – two religions that aren’t well known for political activism. In the 2013 census, if you got all of a single census religious grouping to agree to vote together (like that would ever happen), only the Catholics, Anglican, and the Presbyterian, Congregational and Reformed” groupings would even get to the 5% threshold.

But with the groups that tend to be so prevalent in the christian political circles, you tend to see 5-20 thousand in the demographics – less than 1% if they happened to all agree. For instance wikipedia says about the Destiny church

At its peak in 2003, Destiny Church had a network of 19 churches throughout New Zealand, with a total membership in excess of 5,000. By June 2012 it had 11 remaining churches, with fewer than 3000 regular attendees. Churches have closed in Porirua, Wanganui and Dunedin.[16] By June 2013, Destiny Church Wanganui was no longer listed on the main church website.[17] In addition, other branches had Kaitaia, Opotiki, Taumaranui, and Hawkes Bay had either closed down or merged with other church branches.[18]

Just to give that some perspective, this site routinely attracts between 3000 and 5000 unique visitors per week who read the site multiple times during the week. I’d have to look it up, but I think that we usually get close to 3000 people who read it more than 5 times per week. Of  course there are differences between our ‘congregation’ and that of the Destiny church. We’re free for a starter…

Which rather explains the poor political performances of the religious right trying to form political parties.

Moreover, any survey that asked how much religious belief played in their political support, it’d probably be very low. Which is what we see in the political votes.

So what exactly are the dimwits of the press doing with puff-pieces especially in the NZ Herald about the Density church and National’s religious right MP’s political offerings? I know that mid-first-term is a dead political period with little ‘sizzle’ to write about. But this is just stupid waste of bandwidth. 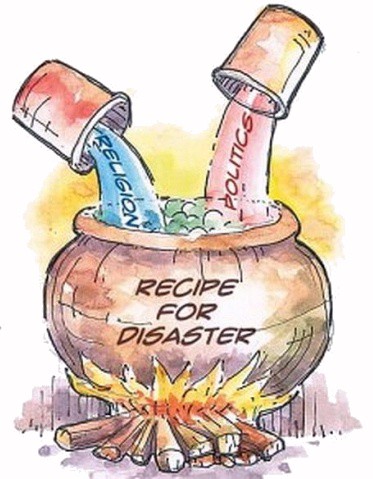 There are politicians with religious backgrounds scattered through most political parties. Offhand I know of a number that I’d personally support, not particularly because they’re religious, but because they’re people worth supporting.

I also know of a number that I can only describe a hypocritical arseholes that I’d happily do the metaphorical equivalent of tripping up whenever I get an opportunity. The Tamaki family business is definitely one of those.

It is really just the difference between people who lead by their own example and those who appear to hide behind religion or ideology  to disguise their inherent sociopathy.

59 comments on “Religion and the threshold ”