Blogs and the Political Establishment

Being in the thick of student politics in the mid 2000s, I was around just at the very beginning of social media.

What contribution can a blog make to activism?

Welcome to a new political blog, Corner Politics – “a point at which significant change happens – by Lamia (@LI_politico). 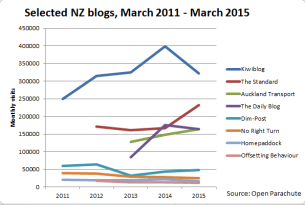 NZ Media and blogs vs blogs

The power of blogs

One of the most bizarre aspects of the Collins / Lusk faction’s plans (as per the leaked Lusk paper) was their perception of and plans for blogs.

NZ is well served in the range of online offerings that are exploring beyond the fringes of the mainstream media. Welcome to a new player, Bernard Hickey’s JOURNALISM.ORG.NZ.

A great interview by Jon Stewart on political blogging. Well worth watching. The part about evolution of blogging in the US is particularly interesting. New Zealand obviously lags behind in some ways but, as is often the case in this small polity, things also have a tendency to move faster once they get going. I […]

Mistakes, I’ve made a few

David Farrar’s three more prominent weaknesses came together in a speculator PR disaster yesterday. The weaknesses are his ego, his trick of using pictures of naked women to boost hits on his site, and his reverse midas touch, whereby every he touches turns to, well, it doesn’t turn out well. See, Farrar led the campaign […]

We had hoped to have the answers for our â€˜interview the leaders‘ series from Helen Clark today. I talked with the PM’s office and they explained the questions are with Clark, she’s been busy travelling, and we’ll have them as soon as they come back. So, they’ve asked for an extension and I said â€˜fair […]

In the Herald today, Bill Ralston sticks up for poor John Key who has been the subject of personal political attacks recently. Like Key, Ralston wonders what is “the cost of the Government using countless bureaucrats to endlessly scour records in an attempt to discover inconsistencies in any utterance [Key has] made”. Ralston needs to […]

Keith Ng of Public Address has a long-standing commitment to improving the quality of journalism in this country. Now, he is proposing a non-partisan wiki-style forum for fact-checking politicians’ statements. It seems like a great idea. We constantly see politicians making statements that are not backed by the facts but have time to only cover […]

It’s been a bit remiss of us to have failed to welcome The Hand Mirror into the left blogosphere. I’ve only just had a proper look at it and I’ve got to say it is gold. Sort of like one of those action movies where half a dozen superheros get together to save the world. […]

Labour with its claws out

The Press has a good article on the political blogs. The Standard and our mates Kiwiblogblog are referred to as “Labour with its claws out”. As has been explained before, we are not Labour: we are a loose group of Leftwing writers, some of whom are associated with the labour movement, but the image is […]

Tony Milne responds to National Party blogger, David Farrar’s recent post on push polling. Tony points out that any push polling undertaken during the last election was most likely a three way affair between the National Party, the Exclusive Brethren and conservative political consultants Crosby and Texter. National have repeatedly tried to distance themselves from […]

I don’t know if this is breaking some cyber protocol (oh, but I don’t much care if I am) but I want to put Jordan Carter‘s post on Helen Clark’s speech up here on The Standard. The reason is that while I agree with a lot of what IrishBill said – mainly that her speech […]

It seems the cats at newzblog have decided to bring our old mate Robinsod on board as a blogger and his first shot is at Farrar and Whale. I’ve spent more than a few nights on the booze with ‘Sod and the guy’s pretty smart and has definitely been around the traps but I’ve gotta […]

While I’ve been away some regular left-leaning commenters here at The Standard and elsewhere have banded together to start NewZblog, a new Kiwi blog that describes itself as “a fine blend of politics with a left twist”. So a big welcome aboard to Red Bus, Illuminatedtiger, Policy Parrot and James Sleep – you guys are […]

The power of the web

All election addicts are casting their eyes to what is happening in other countries & especially over in Australia and in the States. The US political teams lead the way on the integration (and spend power) of web resources & but as this article points out, much of the firepower is pointed at Hilliary Clinton: […]

University of Otago political studies student Geoffrey Miller has set up a blog about the ACT Party, called Douglas to Dancing. It seems to take a rather academic, non-partisan approach and looks like it’s got some interesting stuff. Turns out former ACT MP Gerry Eckhoff wants to start a new Country Party. Wasn’t he the […]

A disturbance in the force?

I might be coming to this belatedly (forgive me if you’ve already noticed it) but it seems the left/right blog war has heated up considerably in the last couple of weeks, and there’s some palpable right wing cyber-paranoia going on. It seems the right have got rather used to New Zealand’s blogosphere being their own […]

You can fool some of the people…

We’ve just been introduced to a blog we think you might like to meet too: Kiwiblogblog <snip> Kiwiblog is a New Zealand blogging phenomenon. It’s hard to say why. It’s certainly not the most well-written blog in the Kiwi blogosphere. David’s posting style is a little too reflective of its author: short, unpretty, rushed posts […]

Has DPF lost his mojo?

I dropped into the National Party’s Kiwiblog again last week and I must say it looks like party insider David Farrar may well be losing his “mojo”. I mean really? He’s been comparing Helen Clark’s policies to “gassing the Jews”? and running lines like: “the Government only thinks that if you question them you are […]