The EPMU Job Crisis Summit provided ample evidence that there is indeed a crisis. In the delusional world of Planet Key it doesn’t exist, while the country drifts.  Russel Norman quoted Brian Easton who likened the New Zealand economy to a sailing ship In Stormy Seas.  Norman said the storm has intensified recently, and no-one is at the tiller.

I’m really pleased to see such enthusiasm for co-operation and dialogue across many kinds of organisation. There was widespread agreement at the summit that leaving it to the markets has failed.  Rachel McIntosh, political panel chairperson, summed up:

This summit brought people together, opened a conversation, launched a Joint parliamentary inquiry into the crisis in manufacturing and invited us to participate.  The EPMU look to be trying very hard to get as many organisations as possible focused on finding solutions.

It’s extremely heartening that the EPMU has stepped up in the face of devastating job losses, and I was expecting the workers’ struggle to be at the centre of the day’s discussions. However, the summit mainly focused on economics and financial policy, which still seems to be predominantly men’s business: the tough and powerful framing of contemporary politics. While my knowledge of economics and finance is pretty limited, I do recognise that, for the workers’ situation to improve, the wider industry also needs to be re-invigorated.  And in doing this, the broader economic, monetary, fiscal and social policies need attention. 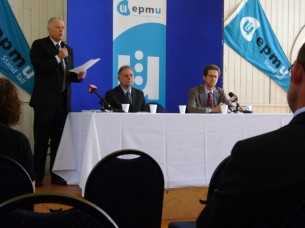 The speakers in both panels stressed the necessity of boosting exports in order to stop the decline of manufacturing and “rebalance” the NZ economy.  Once the rot sets in, it will be harder to re-build important manufacturing industries.   Furthermore, to rebalance the economy, it was argued, it’s the high value end of the manufacturing industry that needs to be developed. One speaker argued that this would benefit from attention being given to the needs and desires of high value consumers, for instance in South East Asian markets.  However, I still don’t follow the logic that the route to a more sustainably productive, fair and inclusive society, is through every country selling stuff to each other. 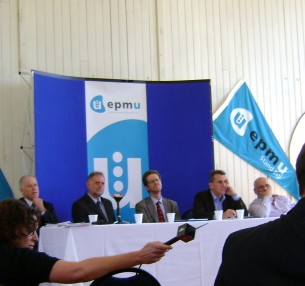 Many at the summit argued that, to stop the rot, the unfavourable exchange rage needs to be addressed.  For them as Sel Pellet said,  “It’s the dollar stupid.”  There was much talk about the Reserve Bank, it’s role, and whether the government needs to take more direct control over the economy and monetary policy. 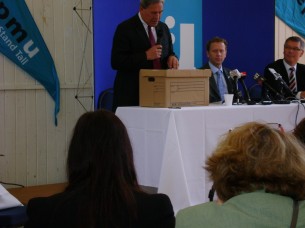 Politics Panel (not Peters’ wine box, but an improvised lectern)

Even though this was a job crisis summit, the workers that keep the manufacturing industry going seemed to get limited mention. An exception was the chairwoman for the first (Business) panel who expressed concerns for workers in her union who get dealt the redundancy card: something that she is witnessing too often these days. The most powerful voice for ordinary workers, was Trevor Bolderson (about 50 seconds into this One News video), who had traveled up from Greymouth to speak for the Spring Creek miners.  The EPMU had worked hard on a plan to keep the mine open, and went to the government for funding. The government didn’t look at the plan.

While several participants said they are open to exploring all possible solutions,  many at the summit, including Labour and the Greens, do not seem to have the courage to fully jettison the neoliberal agenda.  Many were talking about the old paradigms of “growth”, rather than changing course towards a steady state economy.

For many, a new direction seemed to be to follow the recent interventionist, but ultimately still market-driven, and bankster-friendly policies of other countries (David Parker mentioned the UK, US, Germany, China and Switzerland).  They seem to be resigned to NZ always being at the mercy of turbulent storms generated elsewhere on the globe. Maybe they are right…?  Is it possible for NZ to decouple from this system, and develop a new direction, independent of the main havoc wreaked by the international capitalist elite?

The summit ended with the EPMU saying they want to talk with the government, to take a participatory approach, and to carry on talking to people around the country.  They outlined a 3 point plan:

In spite of my misgivings, I am glad the conversations begun on Friday open up the possibility of input from ordinary people: workers and unemployed. And I do hope some of their ideas will be taken up.

And (to the MPs) what of beneficiaries who very often contribute to the economic and social well-being of the country in ways that are rarely calculated?

If you want to participate in developing solutions, see here for information on making submission to the parliamentary inquiry on the crisis in manufacturing.