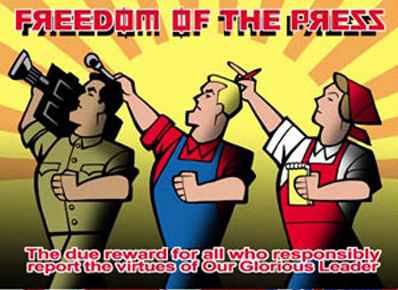 “Comrades! I thank you!” said Honourable Key to the sighs of the crowd. Some were overwhelmed merely to be in his presence. One young cadre presented Beloved Leader with a birthday card.

Honourable Key had special message for the worker cadres. He told them not to fear unemployment or poverty and denied revisionist lies about falling wages. Under Beloved Leader’s wise and esteemed leadership many cycleways will be built across nation and with this great wealth of cycleways many jobs will be created, and some back-office banking too maybe.

One worker asked Honourable Key if it was true the counter-revolutionaries were wracked by splitists and division and would soon be defeated. Beloved Leader agreed it was true.

Worker cadres cheered the wonderful news. They promised to repeat Beloved Leader’s message to one and all. They agreed not to mention revisionist lies and to praise Honourable Key to all who would listen. Faithful cadres informed revolutionary masses that nation’s women spontaneously broke into song at news of Beloved Leader’s birthday.

All agree that under the wise and dedicated tutelage of Honourable Key, our glorious nation will bury running dog Australians by 2025.