Are you ‘really’ unemployed?

Governments use statistical tricks to lower the official unemployment rate. This fun video shows how many jobless people get swept under the carpet.
It’s not that the statisticians aren’t aware of the jobless. In the US, they use different definitions of unemployment. ‘U-3’, the official unemployment rate only counts those people who are actively looking for work who don’t have any work. The wider ‘U-6’ counts people who are ‘marginally attached’ to the workforce, or have given up looking because there are no jobs, or have taken a few hours work a week in lieu of a real job.

America’s 10% official unemployment rate might sound bad but that’s just the tip of the iceberg. U-6 unemployment stands at 17.2%.

In New Zealand, Stats counts the underemployed and the people who have become ‘discouraged’ from seeking work but doesn’t add them to the count for the unemployment rate. 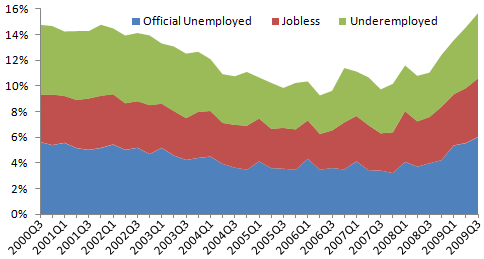 When we do count them, the number of jobless people leaps from 150,000 to 375,000. The reality is that nearly 16% of Kiwis who want to work can’t find jobs or enough work, and the government is doing nothing about it. No wonder it’s something the government doesn’t like to talk about.

(graph data from Stats infoshare. It’s not seasonally adjusted, btw, Stats doesn’t bother doing that for jobless and underemployed. You can see the seasonal variations, like the one the government is now claiming credit for)

5 comments on “Are you ‘really’ unemployed? ”