First the Hone bash, then the royals

It’s looking like Team John Key is trying every PR spin trick in the book to gain an advantage for the election next year.  Does he have anything to offer Kiwis other than bash, spin and photos ops? And McGehan Close?  The underclass?

As Irish predicted, the Nats continued their desperate smear campaign today with the revelation that David Cunliffe doesn’t actually have a qualification he never actually claimed to have. Honestly, you couldn’t make this shit up.

Key vs Campbell: the transcript

The interview of John Key by John Campbell last night on Campbell Live (on the GCSB Bill), showed what a formidable spin merchant Key can be.  It is important to understand Key’s MO.  This is a work in progress – transcript completed.

Joining the dots: David Cameron is under fire for his links with lobbyists for big tobacco & big oil, via his link with Lynton Crosby.  John Key, with links to Crosby Textor, has also bowed to big tobacco. Networks of Influence.

Paddy Gower at TV3 reveals Lord Ashcroft, billionaire Tory donor and International Democratic Union treasurer, has come to talk to Key again. Just discussed politics generally, said Key. Politics yes, generally no. Ashcroft’s interests are now devoted to polling and blog communication, and he is very interested in our election. Having seen Cameron miss out on a majority,  he’ll want to help Key to one here. 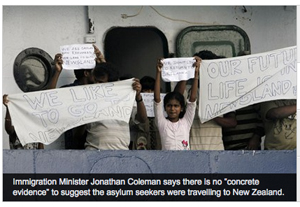 You can’t make this stuff up

The Nats, a party which runs as a franchise of an Australian company (Crosby Textor), reckon that the presence of a mate from Australia at a regional Labour Party meeting shows that Labour is “subject to foreign influence”.

More on Crosby-Textor, mining, and the Nats

We all know that long before John Key got into the gold and uranium mining industry, Crosby Textor Chairman, Robert J Champion de Crespigny was pushing the mining industry’s cause in New Zealand. So, who is this CT man who has been called Australia’s â€˜Mr Gold’, a â€œmining magnateâ€, a â€œresource-sector heavyweightâ€ and â€œa legendâ€?

Who suggested that the mining industry in New Zealand needed to be reinvigorated and should put more emphasis on marketing its fundamentally strong geological resource, telling the NZ Herald that gold mining prospects in New Zealand were at least as good as anywhere in the world, a fact that needed to be exploited?

John Key is pushing ahead with his mining plan despite the backlash and the poor economics for NZ. Why?
Is it simply pay-back time for Key’s spin doctors in Crosby/Textor whose clients have significant mining interests? Either way Key must unveil the shroud of secrecy that surrounds his relationship with the company.

The leaked emails which helped bring about the downfall of former Nat leader Don Brash hit the headlines again today, for all the wrong reasons. The story of who “stole” the emails was nothing more than a successful Tory decoy. Journalists have already forgotten the insidious tricks used by the top echelons of the National Party.

Bluehost have been a pain, but it is all over now.

Ok. The new server is up and running after a few painful days with the system being suspended, and then after moving it to a backup and having a partition run out of space (yesterdays problem). The ostensible reason that Bluehost were suspending my account was because the processing usage on their CPU’s was exceeding […]

Lynton Crosby of the political spinners Crosby/Textor, who ‘advised’ both John Key and Don Brash, has finally given up on trying to pursue a unwinnable defamation case against Nicky Hager and Radio NZ.The case appears to me to have been started largely as intimidation by the Crosby (and maybe the National party) to find out […]

I wish to complain…

It turns out that Phil Goff was aware of an allegation about Richard Worth weeks ago that may relate to the current investigation. Labour leader Phil Goff took an allegation of Richard Worth’s inappropriate behaviour towards a woman to Prime Minister John Key about a month ago, it emerged tonight. This was apparently not the […]

The topic of Crosby Textor has emerged again with a story in the NZ Herald. While it is unsurprising to read that Crosby Textor is “drumming up business after last week’s election by offering insights into the new Government and its personalities” there’s another aspect I think also deserves examination. How and why is this […]

When confronted by media, both Key and English immediately described the secret agenda recording as “Pathetic”, despite being doorstepped in different cities. They, or Crosby|Textor, have obviously previously constructed a line. Just in case. All very good but the origin of pathetic (and pathos) is not quite what a lot of people would think: [Origin: […]

Rochelle, that was pretty good.

Well it turns out my niece has been having fun and done an effective google bomb on John Key. I’ve just been watching her TV3 clip when I wrote this post. Rochelle shows her experience with the media in expressing her opinion. This is something that belongs in the Tips on campaigning. I’ve had something […]

Lord Ashcroft is a worry. Not just to John Key, who had to admit that he didn’t know why Ascroft had met him at Key’s home: it just happened to be in his diary. According to an article in the Daily Telegraph, he is also a worry to many in the Conservative Party. Ashcroft “does […]

Eddie’s already posted on the scripts the Tories in the UK used when it came to explaining (away) their associations with dodgy political consultants Crosby Textor. It was the same broken record used here by National in recent weeks. The anti-Blair “demon-eyes” ad below ran in 1997. The ad on the right ran here last […]

This is from 2005 in Britain but we saw the same script played out here last month: When SpinWatch asked Tory central press office to clarify the roles being played by Crosby and Textor the conversation was as follows: SpinWatch: ‘I was wondering if you could clarify the role that Lyndon Crosby and Mark Textor […]