Key to Homeless: You Can Stay at Mine

Budget 2016 will provide bugger all in additional funding over the next four years to ensure the New Zealand  continues to offer a world-class housing experience, Prime Minister and Money Tourism Minister John Key announced today.

The lack of investment is part of a $0 million housing package in Budget 2016 to further support poverty’s contribution to economic growth in hard pressed regions across New Zealand such as Remuera, Fendalton and Buenos Aries.

“The New Zealand housing crisis has already been extremely successful in attracting high-value visitors to our casinos and brothels and getting their money to stay longer will have many benefits, with regional economies experiencing positive spin offs such as a remarkable growth in small businesses such as meth labs,” says Mr Key.

“This new funding will support work to connect some Great Poverty Rides so communities can benefit from residents spending more time in cars, riding around trying to find somewhere safe to park for the night, urinating in bushes and bathing in the ponds in local parks.

“This lack of funding builds on government investment of nearly nothing to date in developing and maintaining the homeless trail network, where the unemployed and the working poor can trail from WINZ office to WINZ office.

Mr Key also announced details of how the new lack of funding will be used to link poverty trails in the big cities and the provinces.

“The proposal to create a 1536 km continuous cycle trail network by forcing the unemployed to cycle through desperation, hope, disappointment and back to desperation is the type of experience we want to encourage.

“The government has agreed in principle to support this collaboration with people who don’t vote for us anyway, subject to application requirements such as having a permanent address are being met.”

“Poverty brings a range of benefits to local businesses and communities and the New Zealand Homeless Cycle Trail is playing an important role in attracting the overseas rich to help regions realise their exploitation potential,” Mr Key says.

“Following on from my son Max’s dissing of me on facebook yesterday, I can confirm that there is now a room available in my modest Parnell home. It’s suitable for one spoiled brat or perhaps a solo mother and 4 or 5 children. There is also plenty of parking space in the driveway, so I encourage Aucklanders sleeping in cars to come and stay.”

Prime Minister Key also confirmed that he would be converting his tennis court into an emergency tent city.

“Sure, I recognise that demolishing the house next door to build a tennis court could now be seen by some as selfish, extravagant and contributing to the loss of available beds in Auckland. But I really needed to work on my backhand.”

The Prime Minister also hailed the success of his approach to housing.

“So, I grew up in a State house and when I became Prime Minister, I set myself the target of making sure nobody else had to do the same. Nowadays, very few New Zullunders have access to social housing, which goes to show just how much my dream is shared by ordinary Kiwis.”

“The National Party I lead have been strong on housing since 1935, when we first developed our ‘do nothing and blame the poor for their choices’ strategy. We in the National Party been successfully housing vast wads of cash in overseas bank accounts since the thirties and now we’re successfully convincing South American crooks to house their money here. It’s a Win/Win situation for everyone but the 4 million losers.” 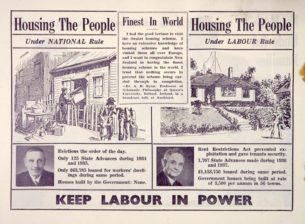 54 comments on “Key to Homeless: You Can Stay at Mine ”