Following on from its earlier release Scoop has uploaded further documents filed in the Hager v Attorney General case.  The documents include Hager’s affidavit, various other affidavits, police disclosure and some exhibits.

Discussion is building about why police resources were put into the case at all.  An affidavit by former Police Controller Wayne Stringer expresses surprise at the way the case was handled.

At paragraph 7 of his affidavit he says this:

I am very surprised to see how much effort and police resource has been devoted to this case.  The Counties-Manukau office routinely deals with large volumes of very serious crime, including murders, rapes, and crimes of violence and child abuse.  Offenders in such cases, unless caught, have the potential to continue to cause extremely serious harm.  Police have limited resources, and in my view rightly prioritise these crimes.  In my view, the offence under investigation here, accessing a computer system for a dishonest purpose, is a much less serious offence than many others the police are called upon to investigate.  Had I been in charge of the office, I would have accorded it a low priority.  The amount of time and resource expended in this case seems to me to be akin to using a sledgehammer to crack a walnut.

At paragraph 14 he says:

I note that the search of Mr Hager’s house must have been very expensive for police.  It involved five officers and a computer expert.  Two had to be flown down from Counties-Manukau.  Expense is always a factor in policing decisions.

Stringer was also surprised at the heavy involvement of Assistant Commissioner Malcolm Burgess.  He is a member of the Police’s executive and is Wellington based.  His active involvement in this investigation appears to be well out of the scope of his norman duties.  We are not talking here about the great train robbery.  Slater’s initial complaint was to him.  He appears to have taken an active interest in the investigation and was consulted with before the decision to make the application for the search warrant.

And in a case resembling the great disappearing online Herald story there is a print article by David Fisher that does not appear to have made it online at all.  Given the significant constitutional and political implications in this story you have to ask why. 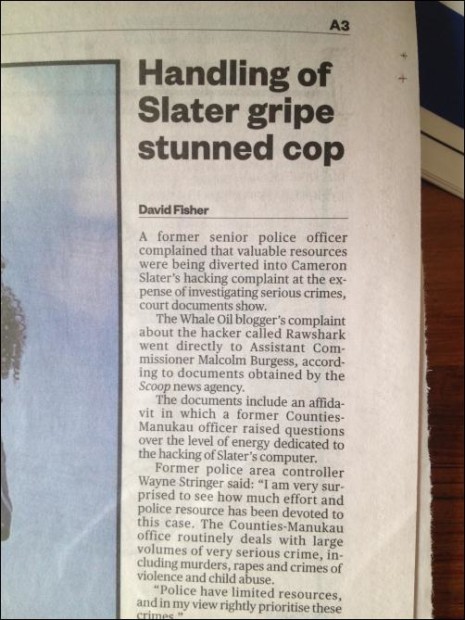 Finally if you wish to contribute to Scoop’s ongoing sustainability you can donate to the Scoop Foundation.