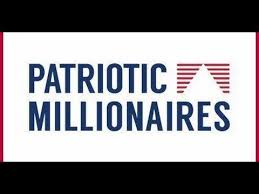 Pushing the boat out on the edges of the social democratic project is a group called the Patriotic Millionaires. They don’t want tax cuts. They want higher taxes.

They are a group of high net-worth Americans committed to building a more prosperous, stable and inclusive nation. They have three core principles:

Their focus is not on the strength or otherwise of the nation-state to redistribute wealth by all its indirect instruments. They concentrate on the direct tax and citizenship relationship with a fairly basic social contractarian platform.

It’s chaired by Morris Pearl, a former Blackrock executive, and on their list includes the likes of Alan Patricof the venture capitalist, the billionaire medical devices heiress Pat Stryker, big tech guy Steve Silberstein, and a fat list of others you can look up.

If you want to read their book, its: Renegotiating power and Money in America.

It’s not every day you hear of power brokers acting directly against their own rational self interest by rocking up to Congress and asking them to take more money away from them.

I’m sure a future progressive government will come up with some amazing redistributive tax platform. Any time soon. What is striking is how absent this kind of group is here or in Australia. We have spectacular wealth disparity here. We have very, very few philanthropists of note. Instead New Zealand’s wealth is carefully worn under a camouflage clothing range called ‘lifestyle’, which you can see richly illustrated in Life and Leisure magazine: the multiple millions required to look like you are living a simple and rosy-cheeked farm life doing craft projects, with the multi-squillionaire husband almost never pictured.

While basic Marxist critiques apply, what we don’t have is a group with any semblance to the Patriotic Millionaires. Maybe we’re not mature enough, maybe we will never have enough millionaires either numerically or proportionately for something similar, maybe we won’t ever let go of the fear impulse after 30 years of wealth draining out of the middle class. Maybe those are the usual excuses.

A future progressive government prepared to tilt New Zealand’s tax system will seriously need the support of those who can clearly say: I can be rich and I can pay more tax. And be proud of what that will do for New Zealand.

128 comments on “The patriotic millionaires ”