There was some heavyweight competition this week.

In the United Kingdom Katie Hopkins became upset because a Daily Mirror article had the headline “Katie Hopkins banned from leaving South Africa after taking ketamine”.  She had taken ketamine, although apparently for medical reasons and she was banned from leaving South Africa.  So although in terms of sequencing the headline was correct the drug was not causative of the banning.

Instead she had her passport confiscated for a brief time for spreading racial hatred.

There are only two possible reasons for her complaint.

The Daily Mirror responded in the most cutting way, posting the retraction to end all retractions.

One of the best newspaper corrections in history pic.twitter.com/kPjjRtYJ8o

The complaint was upheld but no damages were ordered because of the posting of the retraction.

Locally there was Judith Collins releasing bizarrely minor allegations against Phil Twyford on successive days.  But at least unlike her leader she was generating media attention so she was excluded from consideration.

There was Simon Bridges on his national tour meeting lots of ordinary kiwis like in this photo. 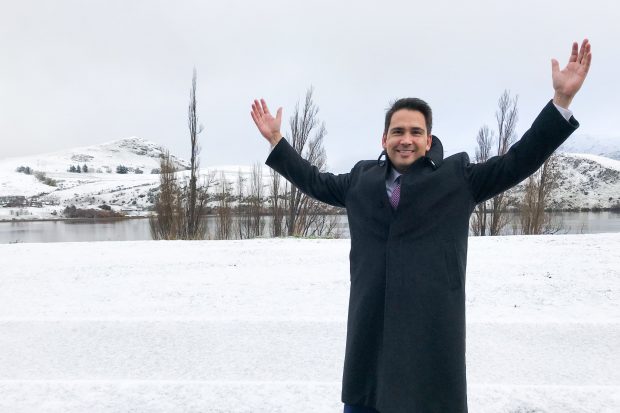 Looks more like Siberia to me than provincial New Zealand.  Maybe Judith had a hand in designing his itinerary.

The finalists were Gerry Brownlee and Paula Bennett for as insipid a parliamentary attack on speaker Trevor Mallard as you can imagine.

Believe me Trevor Mallard is not on my christmas card list.  But I thought he handled the situation adroitly and showed Brownlee and Bennett to be chumps.  It was hard to choose between them.

Bennett was a candidate for throwing her toys out of the cot for having a question taken off her and for carrying on her grievance the next day.  But she did use an unparliamentary comment which standing orders prohibits.  So what did she expect?  She did not misspeak.  She was reading from her notes at the moment that she said “bribe”.  This was planned as a test of Mallard.

And Gerry Brownlee was also a candidate for letting rip with some comment aimed at Mallard after Paula’s question was taken off her.  It is not recorded in Hansard and I cannot make it out from the video but clearly it annoyed Mallard.  And Brownlee then wrote a limp letter to Mallard giving him a 2 pm deadline to grovel and seek forgiveness.  Mallard showed contempt to the letter by not even replying.

Then there were those petulant instances of disobedience in the House.  They reminded me more of juvenile bad behaviour in a school class, not the country’s top institution trying to run our country.

The really stupid thing is that it all looks so choreographed.

Here is film of Bennett and Brownlee planning it.

National wanted to escalate the fight with Mallard and they must have discussed doing something dramatic like staging a mass walk out.

At least if we believe Bennett this was the case.

We had discussed it. I knew he would be gunning for me and thought he might throw me out given a chance. We decided against mass walk out today. Try and build a bridge first

But Gerry refused to accept that any planning occurred.

On Friday he said:

We never considered walking out en masse.  That is just bad reporting.”

And he took the chance to repeat “stupid little girl” twice.

It was a line call who to award this week’s Doofus to.  But Gerry Brownlee, for contradicting your Deputy Leader and for saying what looks like a rather big porky pie you are this week’s doofus.

Note to National.  Please keep your strategic geniuses in their current role.  They are doing great for the country.

And note to the Greens.  Now would be a good time to get your questions back.  Currently they are being wasted.