Simon’s sure fire way to deal with difficult questions 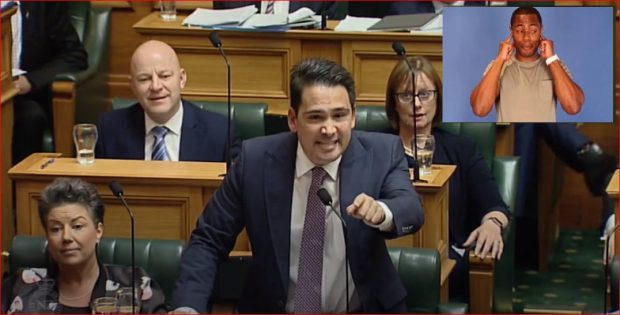 This is so cunning you could be tempted to pin a tail on it and call it a weasel.

And I acknowledge Ad’s lament that this is like bayonetting the wounded but this particular gem cannot be ignored.

Simon Bridges has worked out the perfect solution to the continuing problems posed by Jami-Lee Ross’s shedding of sunlight on the very murky workings of the National Party.

The solution is … wait for it … refuse to answer questions and say you are moving on.

The context is that Bridges was asked what the “disloyalty” was that Ross was accused of mentioned in the latest Ross tape.

And this was Bridges’ response.

This morning Bridges would not be drawn on what the disloyalty comment was referring to.

He repeated comments from the previous day, saying he was not prioritising Ross over the allegations and that he dealt with the matter “as the women involved wanted us to”.

He then became dismissive of reporters’ questions and repeatedly referred to his comments from the previous day.

“Every time a tape comes out, I’m not going to talk about it, I answered questions yesterday on this.

“I’m done talking about him. If people want to listen to the tape, they can do that, but I’m done with it. National is moving on. People are telling me they want us to hold this Government to account and focus on things that actually matter to their lives.”

What a great strategy.  What possible problems could there be?

But imagine if Labour did the same.  Further questions about Karel Sroubek?  Meka Whaitiri?  The Wally Haumaha inquiry?  Imagine if Government Ministers said they are not going to talk about it and want to move on?

I hope the media do not accept this.  One question in particular, about the partititioning to hide a $100,000 donation demands further scrutiny and needs to be asked and asked until a full response is given