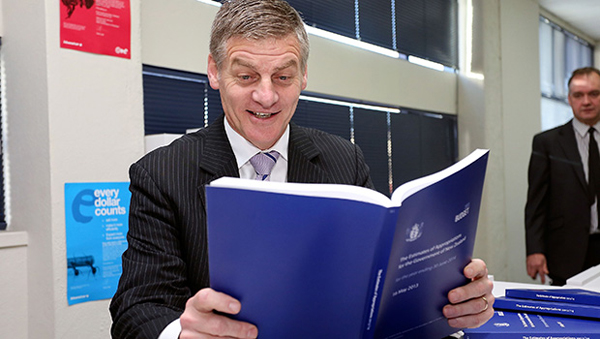 Reprinted with permission from the Failed Estate.

One of the first budgets I covered as a journalist spelt the end of the career of the man who delivered it.

John Dawkins, who had been finance minister in the formidable first Hawke cabinet of 1983, had finally achieved his ambition of taking the treasury portfolio after Paul Keating rolled Bob Hawke for the prime ministership in 1991.

Two years later, Dawkins was gone. He quit politics after the debacle that was the 1993 budget. This is when Keating went back on the L-A-W tax cut promise he had made before his ‘true believers’ election victory against Hewson that year.

In the months after the budget (the last one delivered in August), the program stalled in the Senate. With memories still fresh of the supply crisis of 1974, financial markets became skittish and the Australian dollar sank to around 64 US cents, a then seven-year low. (Recall, Australia was just coming out of recession then).

Having anchored the editing for a US financial newswire inside the lock-up, I recall the real work began in the weeks afterward, filing headline ‘snaps’ to trading screens from our reporters at Canberra doorstops where Keating or Dawkins would be fired questions about budget negotiations. It was pretty shambolic.

These days, it’s hard to imagine financial markets getting anywhere near as excited about an Australian budget. Most of the key measures are flagged well ahead of the event and the bond markets are telegraphed the financing task. In any case, as a ‘AAA’- rated borrower these days Australia finds no shortage of demand among global pension funds for its relatively high yielding bonds. Yes, our public debt has doubled in five years, but it still pales in absolute and proportionate terms to the liabilities of major economies, including the USA.

This means Australia is rarely on the radar of global markets, living off its reputation as a well-run economy with sound public finances, and two major parties broadly committed to the (albeit now shopsoiled) Washington consensus of independent monetary policy, fiscal responsibility, open markets and a commitment to free trade. Put another way, compared to the ‘Breaking Bad’ dramas over Trump, Brexit, the  European monetary union and the fiscal and monetary policy experiments elsewhere post-GFC, Australia (with 27 years of uninterrupted growth) looks like another episode of ‘Law and Order’.

So why is the Australian budget still treated as such a big deal, with hundreds of journalists and analysts flocking to Canberra for a high-security, highly expensive six-hour lock-up? We’ve seen that the markets don’t care much anymore, most of the detail is strategically leaked in the weeks beforehand to sympathetic journalists to maximise coverage and much of the variance in the bottom line from one update to the next is due to exogenous factors beyond the government’s control.

After suggesting the media collectively boycott the whole circus, I had a back-and-forth on Twitter about this with ABC commentator Annabel Crabb, who made the point that it would be hard for her and others to offer an informed opinion about the budget without the lock-up. My response to that is, firstly, why should we be hanging out for their opinion anyway? Sure, share your thoughts by all means but what makes journalists’ insights any more special than anyone else’s, other than the fact they’ve had a six-hour head-start in reading the documents? Keep in mind the entire budget is available online these days within a minute or two of the treasurer getting to his feet. If you know where do look it doesn’t take long to get up to speed.

Understandably, Ms Crabb wants to offer her viewers an informed, considered view, not a “hot take”. But perhaps if the budget was just released without a lock-up (as most countries do BTW),  journalists would go back to the traditional order – first report the facts, THEN offer expert analysis and THEN tell us your opinion once everybody has absorbed the information in real time. The danger with the lock-up is that the coverage expands to fit the investment in the occasion. In other words, it suits the political class to corral the media for a whole day so it can control the message and it suits the media, having made such an investment in the theatre of the budget (like an opening night on Broadway), to preserve the exclusivity of access that the lock-up provides. Disintermediation, digital media and the real-time access that everybody has to the key documents only makes the established insiders more defensive on this score.

I’d also argue that the mutual back-scratching around the budget puts the media at risk of being complicit with the government rhetoric about “running the economy” and “creating jobs”. The depiction of luck as skill suits the insiders. This latest budget, for instance, shows that a $26 billion windfall since the last fiscal update in December is funding another round of the now ritual pre-election tax cuts.  A good chunk of that turnaround was due to a synchronisedglobal upswing in the other developed economies as they finally emerged from the post-GFC slump. The rest was an overdue rebalancing of our domestic economy after the post-mining boom hangover.

So as much as the media wants to personalise the budget process (Scott at the controls like Kirk in the Starship Enterprise), the reality is the government is not ‘in charge’ of the economy. And that’s why this trend of making 10-year projections beyond the four-year forward estimates is just nonsense. This latest three-phase tax cut, culminating in a virtual flat tax regime by 2024, is particularly silly. Imagine Peter Costello, in the midst of the commodity boom of the early 2000s and money coming out of his ears, projecting tax cuts for 2008. What could go wrong?

The truth is the Australian economy is a tiny cork on a big, heaving ocean. We’re a minor-to-middling political power, which largely outsources its foreign policy to Washington. Our political culture is increasingly a pale imitation of the partisan 24/7 shouting that dominates Washington (minus the guns). Our thinktanks import their spotty libertarian thought-bubbles from across the Pacific and our pop culture is almost entirely derivative. For all the noise and gnashing and wailing of teeth, the budget deficit swings around 1-2% of GDP most years. Our debt of 20% of GDP compares with levels of 80,90, 100% and more in other developed economies. The political argy-bargy and column inches filled is way out of proportion to the global significance of it all.

If there’s a story in this budget it’s connected to a bigger one about the exhaustion of the three-decade neoliberal experiment globally. Once governments have privatised everything and outsourced it all and transferred every single risk to the shoulders of individuals (so they are ‘free’), what’s left? Politicians are reduced to tedious, train-spotting arguments about revenue-to-GDP ratios and “the path back to surplus” (the economic equivalent of waiting for Godot). Outside economics, they are left to fight manufactured culture wars to fuel the permanent outrage machine at News Corp – hence the entirely ideological budget cuts for the ABC and the quarter of a billion dollar ‘chaplains’ program. Even the tax cuts serve an ideological purpose, sold in the American style as “it’s the people’s money and it’s government’s job to get out of their lives”, language that is totally alien to Australia’s social democratic tradition.

With the politics ritualised, so is the media coverage. Panels of talking heads tediously debate the political strategy and whether the tax cuts will shift Newspoll. The images are always the same – the treasurer in shirt sleeves strolling through the lock-up and chumming up with our favourite commentators, the piece to camera above the huddled journos, perched over the books like anxious students in an HSC exam (“pens down, time’s up!) the references to the “centrepiece pitch to middle Australia”, the PowerPoint presentations, the well-rehearsed talking points from the rival political players – it’s beyond boilerplate.

Of course, there are real stories in the effect the budget measures have on people  beyond Canberra. But you don’t hear them beyond the hastily constructed and clumsy family-at-home-in-front-of-the-telly voxpops. As Bernard Keane observed in Crikey, the budget is now a parlour game for the political class, a highly ritualised and abstract exercise totally divorced from the real-world impacts of the taxing and spending decisions. The game is now so airless and artificial that politicians set as their benchmarks for success arbitrary revenue targets that bear no resemblance to anything anyone cares about or connects with, which I guess is the whole point.

In the meantime, it is no wonder people are switching off and searching for a political movement that returns to the public a sense of their own agency, that protects and strengths our social infrastructure and that purges our exhausted political conversation of the dead Hayekian worldview that created this mess.

It’s time to close the curtain on kabuki economics.