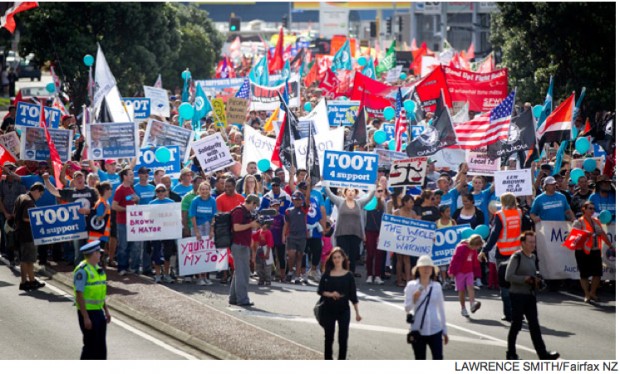 The labour dispute is turning into a fiasco for Ports of Auckland. Today thousands of people marched through Auckland in protest:

“It’s (the protest) wide-spread and strong these people are angry and they have every right to be, and we’re angry for them, ” Labour MP David Cunliffe told ONE News.

The march included “At least a hundred overseas unionised workers”. But that isn’t the only international dimension to this conflict:

Australian port workers are refusing to unload a ship which has been worked on by non-union staff in Auckland, as long-standing industrial action reaches the other side of the Tasman. Union members at the Ports of Sydney are refusing to unload the Maersk Brani, which docked at 5am today. The ship left Auckland on Wednesday evening, after being handled by non-union staff.

In a sign of solidarity, union members in Sydney were refusing to unload the ship, and currently had a picket of between 30 to 40 protesters outside the Ports of Sydney, TVNZ reported.

Union members at Wellington and Tauranga last week refused to work on ships which had been loaded by non-union members in Auckland, but a court injunction forced workers at both ports to unload the vessles.

The Maritime Union of Australia (MUA) has vowed to support their New Zealand equivalent for “as long as it takes” as protests are held at a Sydney port following nearly 300 Ports of Auckland redundancies.

The MUA were among several thousand people who marched in central Auckland – from Queen Street to Teal Park – on Saturday afternoon in protest of Ports of Auckland making 292 Maritime Union of New Zealand (MUNZ) members redundant following a lengthy industrial dispute.

At least 10 unions from around New Zealand, Australia and even the United States turned out in support. …

The United States International Longshore and Warehouse Union (ILWU) vice president Ray Familathe said he represented thousands of stevedores along the west coast of the US who support MUNZ. During a speech to crowds Mr Familathe hinted the ILWU may also refuse to unload ships in US ports if the dispute continued. “We’ll stick with them (MUNZ) all the way to the end,” he vowed.

The piece is repeated in the Sydney Morning Herald here.

Support for the port workers is international. Unions in Australia are already taking action, America is likely to join. Note also the phrase – “as long as it takes” – a warning that should be drummed into the heads of Len Brown and every idiot involved in running Ports of Auckland. Even if cargo is moved through the port by non-union labour, it may be delayed or refused at its destination. What customer would want to ship their goods through Auckland? The damage to the business is going to far exceed whatever savings they were hoping to achieve by treating workers like cattle.

There is no business case for the employers’ position any more. If Ports of Auckland stay on their self destructive course it can only be about ego and posturing – not wanting to be seen to “give in”. Get over yourselves boys. Reach agreement with the workers, and get the port working again.