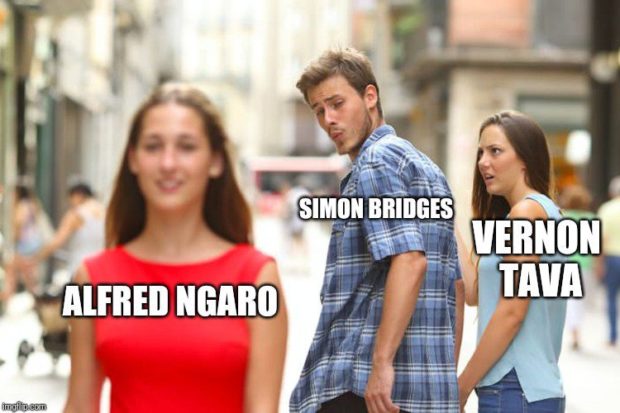 It appears that National’s dream of an alternative Green party that would drive the real Green Party below the threshold is in tatters with news that Sustainable NZ is on the skids.

Fledgling political party Sustainable New Zealand has been rocked by a flurry of resignations and allegations of questionable behaviour by its leader, Newsroom can reveal.

One of the departees, former party secretary and board chair Helen Cartwright, has criticised the party’s lack of profile, policy and money, likening the nascent organisation to “a fast fail”.

Sustainable New Zealand launched in November last year, with founder and leader Vernon Tava pledging to lead a “full-time environment party” which could partner either National or Labour.

However, the party has struggled to find any traction since then, and has failed to register in any public polling to date.

Cartwright’s description of the state of the party is brutal:

We have no policy. We have no profile. We have no money. We operate with no regard or reference to our constitution and rules … We do not have a bona fide party leader nor a legitimate board.”

She also has an odd view of what Green politics is all about:

I am a lifelong entrepreneur and the skill of staying alive in my profession is to be able to see an opportunity and commercialise it, but this must be combined with the ability to spot a fast fail and exit it.”

True greenies do it for the environment, not for the commercial opportunity.

The treasurer has also gone as has the national volunteer coordinator and the party’s youth wing leader.

Vernon Tava has made a brave face of things and suggested that people come and people go.

But with dwindling numbers, no resources and no policies he is not going to be a support party for National.

In fact the best that could happen for the country is that he hangs around and drags some votes out of National which are then wasted.

National must be despairing at its lack of friends.  It has to manufacture a party by giving up one of its strongest seats, the Maori Party confirm they have more in common with Labour and the nascent blue green party is withering on the vine.

Maybe it is time for National to reconsider its relationship with the Destiny Church Vision NZ Party. I am sure that Alfred Ngaro is willing to help.

23 comments on “Sustainable NZ not so sustainable after all ”