Who agrees with you Bill?

Last night Bill English emphatically defended and agreed with Steven Joyce’s lie about a “hole” in Labour’s budget – specifically the disproved figure of $11.7 billion. Jacinda Ardern took him apart with one simple question. English has nothing left now.

The economists have spoken, and Steven Joyce’s claim that there is a $11.7bn “hole” in Labours’ fiscal plan shows him to be either a liar or a fool. Shame on Bill English for repeating it in the debate.

What the National Party president and board knew

Newsroom has another investigative piece on the Barclay debacle. This is not only about a single MP and a lying Prime Minister. It’s also about the governing structure of the political party in charge of running the country, and who was involved in the coverup and dishonesty.

Burying the last shred of his credibility in a deep hole forever, Bill claims that nobody realised Todd Barclay recording of secretary might be a crime. It’s like the events of 2008 and 2011 never happened.

So English lied to Parliament too

Labour and Peters have both made complaints over English’s lie to Parliament. Peters is calling on English to step down. That’s going to make any post-election NZF/Nat coalition a bit tricky.

Two faced English warned of the housing crisis in 2010

PM Bill English denies there is a housing crisis.

In 2010 he knew about and warned of the housing crisis. 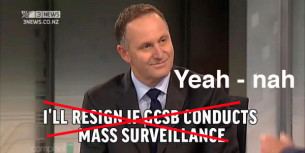 The next time Key repeats the lie that there was “too much noise”, I suggest that the interviewer play the audio of the event to the audience, and let them hear for themselves.

Well well – Mr “No middle ground. I’m right. He’s wrong” is changing his story. He now admits that surveillance did go ahead…

On Campbell Live, and on other occasions, John Key has claimed that critics of the GCSB spying bill were all wrong. The Human Rights Commission – wrong. The Law Society – wrong. The Privacy Commissioner – wrong. Dame Anne Salmond – wrong. Everyone else wrong – only he – John Key – and his secret advisors were right, and we the sheeple have nothing to fear.

Now in a stunning embarrassment it is Key that has had to admit that he was wrong. Or a liar.

So what was Dunne’s price?

Peter Dunne said that the GCSB should not spy on New Zealanders “under any circumstances”, but he will now vote to let that happen. He has made himself a liar and a hypocrite. Why? 3 News and others speculate on what Dunne might have got in return. What was his price?