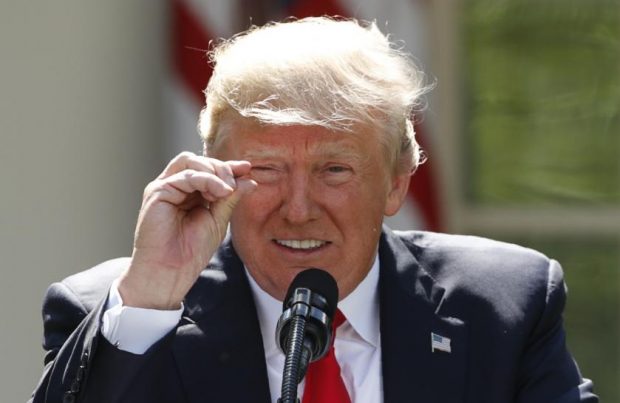 The phrase “no collusion” has been resonating loudly in the USA during the past fortnight.  And liberals are upset.  We had hoped that following the release of the Mueller Report tall men in dark suits wearing sun glasses and having FBI badges would turn up at the White House and lead the orange one out in handcuffs.

Well it did not happen.  Or has not happened so far at least.

But it may not be time for Trump and his supporters to celebrate.

According to current Attorney General William Barr who was allowed to summarise Mueller’s 300 page report into 4 pages there was no evidence of collusion with the Russian Government during the 2016 election. Barr could not however whitewash Mueller’s finding that he could not conclude that Trump had obstructed justice but that the report did not exonerate him.

And for someone who has so much to say about so many things Trump was never interviewed by Mueller, despite many, many attempts to do so.

Amanda Marcotte at Salon thinks that even this was too generous a finding.  She says this:

We know Trump obstructed justice: He did it in public, starting with the Comey firing. We know he literally asked the Russians to steal emails from Hillary Clinton, because he did that live on TV. We have good reason to believe that Russian intelligence took the request seriously, because within 24 hours, they were doing exactly as Trump asked. We know that Donald Trump Jr. and Jared Kushner took a meeting with Russians promising “dirt” in exchange for sanctions relief, and we know that Trump has tried to use his power to dial down sanctions on Russia. We know that Donald Trump stood by Vladimir Putin in public, arguing that Putin’s denials should be believed and that the FBI’s findings that Russian agents orchestrated the 2016 election interference were false.

What we don’t know is the extent of the obstruction and collusion behind closed doors, because there’s been such a massive and, so far, successful effort at a cover-up. Barr’s sleazy move of putting out a brief letter full of weasel words and letting people assume that’s the “Mueller report” needs to be understood in that context.

In the end, this is yet another reminder that the entire Republican Party has been consumed by the corruption of the Trump administration. That’s why it’s not enough to talk of ousting Trump, either through impeachment or the likelier option of defeating him at the ballot box in November of next year. The reason Trump got so far in Republican politics in the first place is because the party is irredeemably corrupt, and he owes his continued safety entirely to that corruption.

It’s easy to get into the weeds on the various scandals and engage in line-by-line debates over the evidence, but that’s not the important part. The bigger picture is clear: Republicans are corrupt and will go to great lengths to cover up criminality. They are taking down the country with their greed and depravity. Bill Barr’s fake version of the Mueller report is just the latest example.

And it appears that individuals involved in the investigation think the same. From the New York Times:

Some of Robert S. Mueller III’s investigators have told associates that Attorney General William P. Barr failed to adequately portray the findings of their inquiry and that they were more troubling for President Trump than Mr. Barr indicated, according to government officials and others familiar with their simmering frustrations.

At stake in the dispute — the first evidence of tension between Mr. Barr and the special counsel’s office — is who shapes the public’s initial understanding of one of the most consequential government investigations in American history. Some members of Mr. Mueller’s team are concerned that, because Mr. Barr created the first narrative of the special counsel’s findings, Americans’ views will have hardened before the investigation’s conclusions become public.

Mr. Barr has said he will move quickly to release the nearly 400-page report but needs time to scrub out confidential information. The special counsel’s investigators had already written multiple summaries of the report, and some team members believe that Mr. Barr should have included more of their material in the four-page letter he wrote on March 24 laying out their main conclusions, according to government officials familiar with the investigation.

Robert Reich, also in Salon, clearly explains why Trump’s trumpeting of the Barr finding misses the point.  After detailing far too many misdeeds he says this:

This is the essence of Trump’s failure — not that he has chosen one set of policies over another, or has divided rather than united Americans, or even that he has behaved in childish and vindictive ways unbecoming a president.

It is that he has sacrificed the processes and institutions of American democracy to achieve his goals.

By saying and doing whatever it takes to win, he has abused the trust we place in a president to preserve and protect the nation’s capacity for self-government.

Controversy over the Mueller report must not obscure this basic reality.

All eyes will now be on whether or not the Mueller Report will be published.  If it is not there is something deeply wrong with America’s system of government.

And in related news the House of Representatives has formally requested the release of Trump’s tax records from the IRS.

From Chris Cillizza at CNN:

After months of promises and amid growing frustration from even some of his Democratic colleagues, House Ways and Means Committee Chairman Richard Neal formally requested six years of Donald Trump’s tax returns on Wednesday — a move that will likely trigger one of the biggest political and legal showdowns of the President’s first term.

The request from the Massachusetts Democrat, which came in the form of a letter to IRS Commissioner Charles Rettig and was first reported by CNN’s Lauren Fox, was long expected. Under a little-known (until recently) 1924 provision in the IRS code, the chairman of the Ways and Means Committee, which is charged with setting tax policy, is allowed to request anyone’s tax return — including the President of the United States — as long as they can show that it is part of either an investigation or fulfilling Congress’ oversight role.

Trump does not want to comply.

Asked about Neal’s move on Wednesday, Trump seemed disinclined to instruct the IRS and the broader Treasury Department to comply with the request.

“Now, we’re under audit, despite what people said,” Trump said. “We’re working that out as — I’m always under audit it seems. But I’ve been under audit because the numbers are big and I guess when you have a name you’re audited. But until such time as I’m not under audit I would not be inclined to do that.”

Of course he does not want to have his tax details published.  There may be all sorts of information contradicting his claims that he had no business interests there and no loans from Russia, not to mention a great balance sheet.

Trump’s days of respite may be short lived. And publication of either the full Mueller report or release of his tax records to Congress could result in this particular film again being a reality.

53 comments on “Trump’s tax returns and the Mueller investigation ”