Rather than add my two cents to the debate about whether she’s up to the job or not (she’s clearly not), I’d like to point out that this is essentially Judith Collins telling liberal New Zealand it can go f**k itself.

Given this fact, the question to ask isn’t so much why put such an unqualified person in such a sensitive position so much as why does Collins feel the need to yell “look at me” so loudly right now?

It’s not often I agree with Judith Collins but when she describes Richard Prosser’s racist filth as an “international embarrassment” I couldn’t agree more.

Another day, another example of some unseemly looking stuff from the Nats. This time it’s Judith Collins choosing Robert Kee – a friend of her husband – for a $200,000 a year taxpayer funded job.

Gordon Campbell on Judith Collins and the Binnie report (go read the full article on Scoop). “This is banana republic stuff from Collins”… And so Collins’ “defamation” case against Mallard and Little ends, not with a bang, but a whimper.

Oops – doubled up posting with Eddie – read both posts!

Waiting for the other shoe to drop

The Collins Faction is tooling up again. While Judith Collins herself has been trying to present a more reasonable face in the House, her Slater/Lusk campaign team is trying to undermine her challenger, Joyce, and the incumbent, Key. Upping Tau Henare’s ridiculous run for Speaker is naked opportunism – but a closer read of Whaleoil, and some inside tips, point to a far more ambitious play on the way

Kevin Hague has discovered ACC managers are getting bonuses for kicking people off the scheme.

That’s not surprising – this government beats up on the weak almost as much as it sucks up to the powerful.

So the first car has been crushed. While ministerial grandstanding abounds, a criminologist describes it as “vindictive, malicious, petty and an undignified way of dealing with the problem”.

Judith Collins has finally filed defamation action against Trevor Mallard and Andrew Little. She’s waited until close to the Budget so that the story would be quickly overshadowed and then forgotten. You see, Collins had foolishly got herself between a rock and a hard place. Suing wasn’t the optimal choice but she’s too prideful for the alternative.

There’s series of posts from Simon Lusk on Whaleoil showing the Collins faction taking a distinctly anti-Key line for the first time. Key’s signaled he won’t go easily and he screwed Collins on the defamation suits.. And the polls show he won’t win a third term.

It looks like Collin’s has got herself into a bind with her defamation case and Key’s not gonna get her out.

And why would he? Her flailing offers an excellent distraction from the real PR damage of this dispute – the fact his government is only interested in looking after its mates.

They eat their own

ACC denies leaking Bronwyn Pullar’s name. It’s not credible that they would act so high risk and so politically. Boag and Pullar clearly didn’t leak it. So, that leaves Collins and her office. Collins denied leaking the email to the media … but leaves a fair bit of wiggle room, doesn’t it? The tipline is, as they say, running hot – and the name on everyone’s lips is Lusk. More soon.

“Ms Collins strenuously denies hints by opposition parties that her office was involved in leaking Bronwyn Pullar’s information to the media. She says only herself, one staff member, chairman John Judge and ACC’s chief executive had the information”. Hmm. 4 people, at least 1 head to roll. Not hard to see where this going. Playing Russian roulette with Collins is where she pulls the trigger but aims the gun at you.

It’s strange watching National’s factions fight it out in the media- the Herald on Sunday running the Collins/Slater faction stuff and the Dompost running material from Boag/Pullar. Both sides are scum. Pullar received (somehow) the largest leak in ACC and passed to the media. Collins has imitated her fellow ministers by leaking Pullar’s private details in revenge.

Nick Smith’s handpicked chair of ACC, John Judge, denies that ACC leaked Bronwyn Pullar’s name to the media after she made public the biggest leak of private data in history from the organisation. So, who did? Given the government’s track-record – Bennett vs the solo mums, Brownlee publicising Dalziel’s redzone offer – I’m betting it was Judith Collins.

ImperatorFish: A Political Appointment To The Law Commission?

National appointing one of their own as member without any proper consultation – will people take the Law Commission seriously any more?

Seems Judith Collins has been cutting corners in the appointment of Wayne Mapp to the Law Commission. NRT has the story.

Will Collins walk the talk? 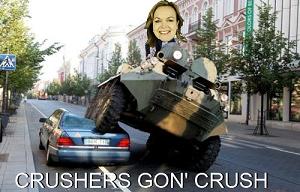 Some are more equal than others

Gordon Campbell demolishes the Nats’ hasty excuse that the blowout in Key’s diplomatic protection costs is due to a particular threat.  He also takes Judith Collins to task for her argument that the police should have an unlimited and unaccountable protection budget , or lives could be put at risk…

Life in the fast lane

Judith Collins has joined the long list of National MPs with their hands buried up to the elbows in the taxpayer’s pockets.  She claims it was all within the rules.  That doesn’t make it right.

Judith Collins has broken protocol to defend John Key’s overuse of the DPS.

And they’ll pick and chose the rules they want to defend it.

Shock! Paying someone else to build and operate our schools won’t save money.

Judith Collins is an utter failure. She calls herself ‘Crusher’ but hasn’t crushed a single car two years after promising to. Crime has gone up under her watch and police deaths have increased despite her claim that the Taser would make them safer. So, there’s plenty of good ways to criticise her without dumb shit like this.

A few of us have chipped in to review the performances of the government in major areas. We’re looking at whether the facts back up the promises that National made to get elected. Let’s have a look at crime/law & order. Rightwing governments are always big on scaring the middle-class about crims and promising solutions. Has National delivered?

3 under the radar stories yesterday. All linked by ideology. Kiwirail to buy 300 wagons from China because its cheaper than building them here. Not allowed to consider wider economic gains. Collins outsources her new prison to a multi-national with a history of prisoner abuse. English wants more ‘value’ from public assets. Value for whom? The likes of Serco?

National are continuing their privatisation by stealth.  Hospitals services and a new prison are the current targets.  Tony Ryall, Judith Collins and Bill English are the ministers currently pushing their ideology in their respective areas.