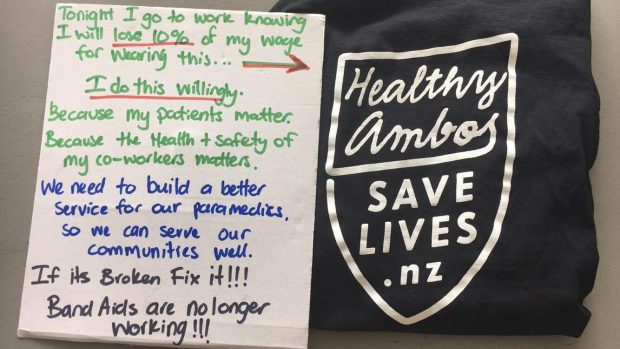 In 2015 the Government passed changes to the Employment Relations Act.  Some of the changes were clearly ideological and designed to weaken the position of unions.

The Government pressed on with the charges even though Business New Zealand chief executive Phil O’Reilly said at the time that the balance of power between employers and employees is fine at it is.  He also said that wage increases should match productivity and growth which is interesting as productivity has grown 45% since 1992 but wages growth is only 12%.

Labour strenuously opposed the changes at the time and said this in its minority report to the bill:

Labour Party members of the committee are opposed to the Employment Relations Amendment Bill. Most of the changes in the bill have been undertaken against the advice of officials, are contrary to New Zealand’s international obligations, and are a backwards leap in employment relationships towards the failed paradigm of the 1990s. The bill continues the flawed logic that employers, who at common law not only control the workplace but have the benefit of the implied duty of every employee to obey the employer’s instructions, somehow need more statutory tools to defeat the right of those who freely choose to join a union and exercise the legitimate benefits of belonging to a union, such as collective bargaining.

The effects of this bill will be to impact negatively on wages in general through a deliberate weakening of the already diminished bargaining strength of employees and the removal of protections for workers when they are most vulnerable. It will do nothing to improve the quest for high-skill, high-wage, and highly productive workplaces built on good-quality and mutually respectful employment relationships.

Another of the changes was to allow “proportionate pay reductions as a response to partial strikes”.  This never made sense to me because if an employee decided to “work to rule”, that is do the minimum required under their employment contract, they could still have their wages cut even though they were doing what their contract required.

These are sorts of powers that Talleys salivated over and you would have thought they would have been the first employer to attempt to exercise this power.  But instead it is St Johns Ambulance who has engaged in some pretty shady action in attempting to resolve an industrial dispute with its drivers who are wanting nothing more than better work life balance and slightly better pay.

The essence of the dispute is that First Union is seeking for its members a 2% pay rise and extended leave benefits.  If you read the Ambulance Professionals First Facebook page there are harrowing tales of work place conditions.  The work is highly stressful and requiring officers to work 9 hour shifts without a break and to send single crews to emergencies is unfathomable.

The details of what the Ambulance drivers are seeking are set out in the healthyambossavelives.nz website:

Healthy Ambos Save Lives is a campaign promoting adequate funding and use of funds for the Ambulance Service operating across New Zealand.  We believe in an effective public healthcare system that works in the interests of New Zealanders.

To further their campaign the workers are wearing a t-shirt with the URL of the campaign website while they are working.  St Johns has chosen to dock workers 10% of their wages if they wear these T shirts instead of a high visibility vest.  How can that be proportionate?  And what is it that causes employers to be so worried about t-shirts?

St Johns has also applied to withdraw from bargaining without concluding a collective agreement with First Union and has the dubious distinction of being the first employer ever to do so.

… First Union maintains it has received confirmation that St John has applied to the Employment Relations Authority to withdraw from bargaining, without coming to a collective agreement.

“It was a foolish move by St John,” First Union spokesperson Jarod Abott said. “It goes to show the true mentality of their current management. It’s quite disappointing.”

Abbott believes it’s unlikely they’ll be successful, because if they are they’ll be the first company to be under the new Employment Relations Act.

“There’s really no evidence from them that they’ve tried to actually settle with us,” he said. “In fact some of the issues on the table haven’t even been discussed yet.”

Last month, paramedics told Newstalk ZB that under-staffing and single-crewing in certain areas was leading to patients dying “on a regular basis”.

“Your eyeballs are hanging out and you know it’s all about chasing numbers not about getting the right care to people,” one officer said on condition of anonymity. “That’s really frustrating and demoralising.”

St John’s problem is that its income is fairly well static although with assets of $263 million as at June 2015 the organisation does not appear to be that broke that it cannot afford to treat its employees properly.

What can you do?  There is a petition Health Ambos Save Lives that you can sign and a strike fund you can pay into. And you should let St Johns know what you think of its actions. 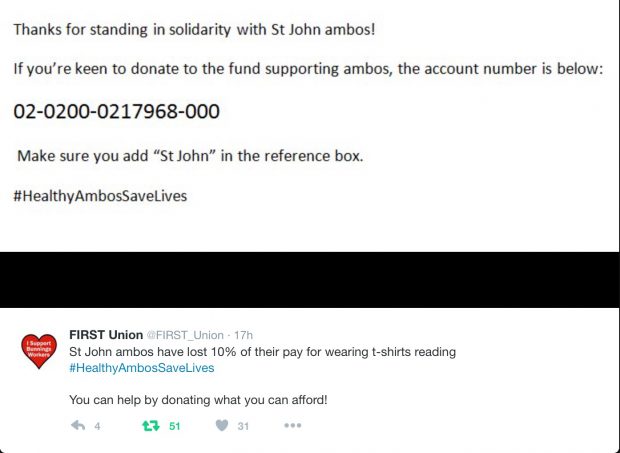