Critics have dismissed the Jacinda Ardern government as being one of style over substance. This is unfair given the challenges this government has faced and the policy achievements it has had. However, it is a government that has much work to do if it wins a second term. And its over-reliance on Jacinda as party leader is a huge strategic risk, especially when the governments front bench is perceived, rightly or wrongly, to be lightweight.

No Right Turn: Ghost homes should be used to house the homeless

Idiot/Savant writes about empty houses and the homeless.

The changing face of New Zealand.

Paula Bennett gets owned by Phil Twyford in question time

This afternoon in Parliament during question time Paula Bennett showed clearly that this Government has no idea what to do about the housing crisis.

Labour MP Clare Curran has been camping in Dunedin’s Octagon to protest against the MSD’s treatment of two homeless mothers. Bravo Clare for putting yourself on the line to draw attention to this issue!

Did Jeremy Corbyn just cut through a whole pile of smash?

If home is where the heart is, then…

What have we become?

What Paula is proud of

Apparently it’s “getting homeless people into homes”. Given the ongoing explosion of homelessness, just think how much scope she has to make herself proud next year…

Who would have thought that a surge in homelessness would result in a spike in crime, and that a dramatic increase in the number of people with no or compromised housing situations would cause an increase in burglaries, robberies and assaults.

Submit to the Cross-Party Homelessness Inquiry

Public invited to have say on homelessness

The Māori Party have joined Labour and the Greens’ Cross-party Homelessness Inquiry, which is now asking for public input into the crisis including from people directly affected.

A week at Te Puea Marae

Unlike our “government”, Te Puea Marae is trying to do something practical for the homeless. Madeleine Chapman spent a week volunteering there, and wrote about it for The Spinoff. Note that The Warehouse will match donations made through Spinoff.

This is why we need a living wage

It is tragic that a family working 80 hours a week cannot make ends meet.

Another day at Te Puea Marae

An update on Te Puea Marae, a homeless teen cancer sufferer, and how to help.

Te Puea Marae, whose only “crime” in this the Brighter Future was to try and help the homeless, “has fears of ‘smear campaign’ “. Naturally Paula Bennett is the real victim here. And furthermore, it’s all Labour’s fault.

In the middle of a housing crisis the Minister of Social Housing Paula Bennett is nowhere to be seen. 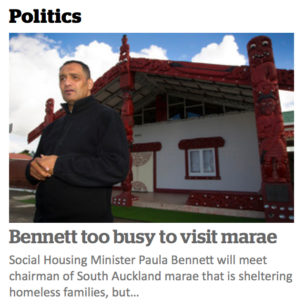 Eleven year old TA is bright, dedicated but homeless. She has challenged John Key to try walking in her shoes.

Remember Key saying yesterday that the MSD and the Salvation Army knocked on the doors of eight cars that people were living in and no one wanted their help? The Salvation Army says nothing of the sort happened.

A petition: “As Minister of Social Development we call upon Minister Anne Tolley to urgently forgive all debts incurred by people who have been forced to stay in Motels as emergency accommodation….”

John Campbell is covering the homeless crisis with stories that highlight the personal tragedies that are occurring and the complete indifference of the Government to their plight.

That is how officials from the Ministry of Social Development described the emergency housing system to Social Housing Minister Paula Bennett – a year ago. What has Bennett done in the year since?